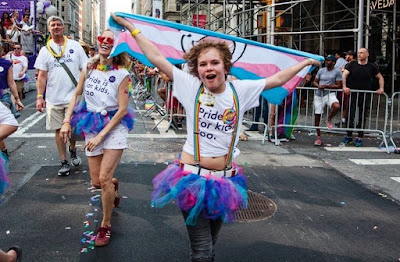 . . . the South Carolina House Judiciary Committee voted down H.4153, a bill that would prohibit transgender youth in middle and high school from participating in student athletics. Today’s vote marks the third time nearly identical measures have been rejected in the 2021 legislative session – first on March 16 when the House Judiciary Committee tabled H.3477 and then again when lawmakers’ attempt to include an anti-transgender proviso in the South Carolina budget was defeated. This vote marks another major step forward in the ongoing fight against anti-LGBTQ policies in South Carolina.
SC United for Justice & Equality released this statement about this step forward.
“We are relieved and grateful that, once again, lawmakers have rejected their colleagues’ blatant attempts to discriminate against transgender student athletes. Today’s vote sends the message that H.4153 - just like its predecessor, H.3477 - and any other bill that discriminates against transgender people has no place in South Carolina.”

The bill was defeated by an 11-13 vote and based upon various tweets, legislators opposing the bill did NOT come to play games:

"I can find no urgency with respect to this issue. In #SouthCarolina, we have a policy that addresses transgender students now," says Rep. @MicahCaskey in #SouthCarolina. "This is a bill that was copied and pasted from an Idaho law that failed." #SupportTransYouthSC pic.twitter.com/KtjgbjBFJc

Rep. @bethbernsteinsc speaks out in support of #transgender students, points out that there would be a conflict between #H4153 and #H4047, the anti-trans medical bill that has been proposed in #SouthCarolina. #SupportTransYouthSC pic.twitter.com/6PprfR4KCQ

Rep. @JustinBamberg: "I don't understand why we're here." Reminds committee they already tabled this bill – and that there's plenty of worthy legislation out there. "We could be dealing with any of that, but instead we're dealing with this for a 2nd time." #SupportTransYouthSC. pic.twitter.com/FoNq76HgS1

However, as SC United for Justice & Equality pointed out, a few other anti-trans bills remain to be decided on by the legislature:

As South Carolina’s 2021 legislative session comes to a close, several other anti-transgender bills remain pending. Last month, a companion bill to H.4153 and H.3477 was introduced in the Senate, where it remains in committee.
In March, lawmakers introduced H.4047, which would prohibit transgender people under the age of 18 from receiving essential medical care and create a school climate where they are unable to be themselves. The bill would make it a felony for medical professionals to provide transition-related care to transgender minors. Conviction could result in up to a 20-year prison sentence for the medical provider. These bills could be reconsidered in 2022.


Harvey Milk LGBTQ Democratic Club Sends Particularly Pointed Note To Tucker Carlson - A short but appropriate note to that jerk.
The rightwing backlash is inevitable. It’s how we handle it that matters. - Thank you. We knew it was coming. You do not cower like a chickenshit in the face of it.
How an Actress and an MMA Fighter Found a Lesbian Happy Ending - Happy endings are wonderful.
Judge tosses suit that sought to block transgender athletes - Just in case you didn't hear this bit of good news.
Supreme court dodges dispute between Texas, California over religious freedom, gay rights - There seems to be a fear here.
Posted by BlackTsunami at 9:11 AM No comments: