The anti-LGBTQ industry tries so hard to make our community the villains in American society that they will blame us for crimes we had nothing to do with.

Hate group the American Family Association has been attacking Target for a number of years because of its policy of allowing customers to use bathrooms and restrooms which match their gender identity. By exploiting the "transgender bathroom predator" lie, AFA gained a lot of media attention, lots of signatures on a petition seeking to shame Target, and probably lots of donations.

But it would seem that all of those things are running dry for the group. Why else would it be sending folks the following email: 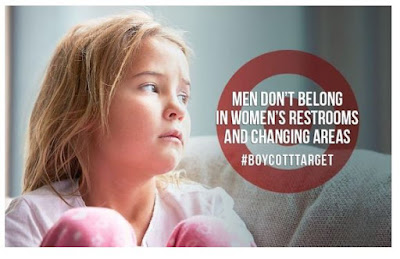 In May, Sean Anderson was allegedly arrested for taking pictures of undressed females after drilling holes in women's dressing rooms in several Target stores in Pennsylvania.
After his arrest, police searched through Anderson's phone and found 56 images of women, 12 of whom were without tops and one who was completely unclothed. They also found six images of young girls who were either partially or totally undressed, investigators said.

Here's the rub. Anderson allegedly drilled the holes on a prior visit. Target knew the holes were in the dressing rooms and knew that these holes allowed for "Peeping Toms" to spy on women undressing. Rather than protecting female customers by prohibiting men from the area, Target merely plugged the holes and continued to let men enter without restriction.

With something as simple as a ballpoint pen, Anderson returned and pushed the plugs out of the holes and used his phone’s camera to continue his disgusting crime of violating the privacy of Target's female customers over and over again.

The bottom line is this: People who shop at Target and use its restrooms or dressing rooms are at risk for sexual exploitation.


AFA's rendition of the situation is mostly accurate, except for one huge and easily recognizable flaw. The situation had absolutely nothing to do with Target's policy or the transgender community at all.  The incident took place last week and almost instantaneously, AFA began exploiting it. LGBTQNation caught wind of the nonsense and said the following:

“As AFA has stated many times, our worries do not stem from fear of the transgender community, but rather from both the real and potential threat that predators and voyeurs would take advantage of the Target restroom policy to harm women and children — and there are plenty of incidents to show that they have,” Tim Wildmon, the group’s president, said in a statement sent to LGBTQ Nation.


Wildmon's statement is an inane cop-out because as LGBTQNation pointed out, Anderson didn't take advantage of Target's policy to commit his crime. He entered the dressing room as a heterosexual man and drilled holes. When Target employees noticed the holes in the changing room, they caulked them over. My guess is that no one from the store knew who created the holes but in caulking them, they recognized the danger they presented. It's rather shady that AFA tries to accuse the store of wrongdoing even about the detail regarding the holes.

But the main problem seems to be that when being called out for the ridiculous attack on the transgender community by LGBTQNation (and The Advocate), AFA chose to double down with its deception regarding Target's policy.

It's rather embarrassing enough to be proven a liar, but to double down on the lie after being shown to be wrong is simply tacky.  But if any group has rightfully earned this embarrassment, it's the American Family Association. 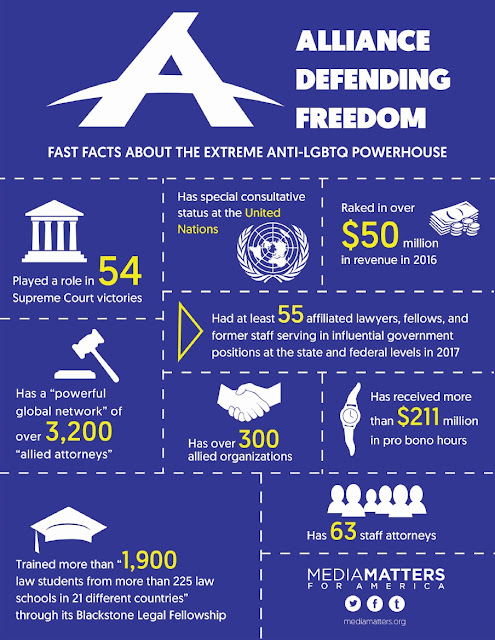 The Alliance Defending Freedom is a supposed Christian law firm which claims to protect the religious liberty of all Americans. However, others see it as a hate group plotting to overturn laws protecting LGBTQ Americans from discrimination.  I am in the latter category.

ADF has been working behind the scenes to undermine the rights and safety of LGBTQ Americans for a number of years. The organization has been the architect behind several anti-LGBTQ cases  (such as the Masterpiece bakery case and the Baronnelle Stutzman case) which it has skillfully painted as innocent Christian businesses vs. the onslaught of radical gay activists. Or even worse, children and women fearing for their safety in bathrooms and locker rooms against so-called transgender predators.

But it has a carefully cultivated image in the media of legitimacy.

How does ADF get away with it? Part of the reason is that a lot of people aren't aware of its existence or the extreme positions it takes.  Also,  it has high profile connections in the Trump Administration, a budget of $50 million and a global network of over 3,200 attorneys.  And all of that is devoted to creating a carefully crafted image of purity and discipline in the public eye and the media (some of which are very accommodating, i.e. Fox News) while it slowly picks away at LGBTQ rights and safety.

But let's do a visual. The following video is how ADF portrays itself to the public. On Youtube, the organization pumps out incredibly polished videos like so:

That's the image ADF wants you to see. The reality is uglier:

This should serve as a lesson to the community. The threats to our equality and safety don't necessarily come from off-the-wall street protesters. They don't necessarily come from bakeries or florists who won't treat us like regular customers. They come from groups with huge budgets planning behind the scenes to play long games and weave narratives which will cost us our freedoms. It's not paranoid to say that there are people and groups with huge budgets conjuring up plots against us in expensively laid board rooms because that's what happening. It sounds like a silly spy movie, but unfortunately it's reality.

In the fall, the ADF will be arguing in front of SCOTUS again in cases which may decide whether or not companies and businesses can fire us simply for our sexual orientation. I have a hope that good will prevail.  But regardless, folks need to get educated and send the word out about ADF.

I look at the ADF like the infamous Koch Brothers. The group is very powerful when it can do its  business without notice. The most dangerous thing to the ADF is notoriety. You can steal when no one is watching.  When people are watching and know you as a thief, it's not so easy.  ADF's unearned sterling reputation partly comes from the fact that not too many people are aware that it exists. I think we as a community should change that.

Because no one can dish out the dirty like we can.

The extremism of anti-LGBTQ powerhouse Alliance Defending Freedom - Media Matters has an exhaustive profile on ADF. Everything you need to know and then some.

GLAAD spotlights Alliance Defending Freedom’s decade long anti-LGBTQ legal strategy - GLAAD spotlight on ADF from 2017 but with a wonderful detailed look at the history of the cases it has brought against the LGBTQ community.

Conservative publication PJMedia digs a hole into the credibility of anti-LGBTQ hate groups - A piece I wrote last week. The conservative media network bends over backwards to sanitize ADF.
Posted by BlackTsunami at 4:38 AM 2 comments: