Know Your LGBT History - Tales from the Crypt - 'The Assassin'

Let's have a little fun today. Having a character in a movie or tv show being revealed as lgbt is always a good plot twist, even though sometimes it's not necessarily a positive one for the community.

Check out this episode of Tales from the Crypt entitled  "The Assassin" and tell me what you think. The plot twist is probably easy to tell, but I want to know how do you feel about it?

Is it offensive, empowering, or just a plot twist which shouldn't be made a big deal out of.

Anti-gay legal briefs ‘mischaracterized’ parenting study - Well will you look at this. Lawyers defending Prop 8 and DOMA distorted a study to claim that same-sex parents are less able to raise children than heterosexual parents. This distortion is in  briefs they submitted to the Supreme Court. And this news comes from the organization who conducted the study via The Washington Blade:


“We have pointed this out repeatedly, yet to our dismay we continue to see our 2002 research mischaracterized by some opponents of same-sex marriage.” - Carol Emig, president of Child Trends.

My beautiful gay community, this is huge and if it does not receive as much or more attention than Jodie Foster's speech at the Golden Globes, well then I guess we can point out a problem as to why things are so difficult in the fight for equality.

If You Could Refrigerate Homosexuality, It Wouldn't Be A Sin - I. . . I just can't comment on this. I just can't.

Do religious right groups really care about placing children in homes at all? 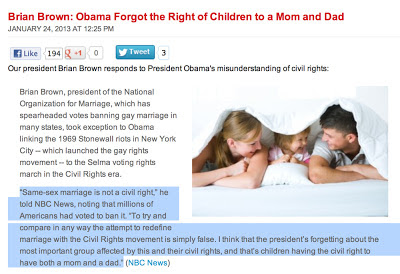 It is from the National Organization for Marriage and encompasses a standard religious right talking point used when the organization attempts to stymie marriage equality, i.e. claiming that allowing gays to marry would deprive children of the "right" to have a mother and a father.

I have heard that same talking point used extensively by other religious right organizations such as the Family Research Council and politicians and public figures who carry their water, so to speak, such as Rick Santorum and Mike Huckabee.

I am of the personal belief that a child needs a good home, regardless of whether that home encompasses the mother/father dynamic, single parent dynamic, or the gay parent (s) dynamic. No matter how much research groups like NOM can manufacture or cherry-pick, the fact is a home with love and support is what matters most.

And it's better than no home at all, which brings me to my point.

According to several groups involved in the adoption of children, there are over 120,000 children waiting to be adopted. In fact, one group, Children Awaiting Parents,  says:

Most are school-aged or older. There are brothers and sisters who need to stay together. More than 60% of the children come from minority cultures. The majority are boys. Many have emotional, physical, learning disabilities or mental retardation. All are waiting for the love and security that only a permanent family can offer.


For all of their pronouncements that "every child has a right to a mom and a dad" and "children need homes with mothers and fathers,"  I am not aware of any effort by NOM, FRC, or any religious right group or their supporters working to get children out of the foster care system and into that mother/father dynamic they preach so fervently about.

No initiatives. No sponsorship of legislation. Nothing

The only time I hear these groups and individuals suddenly care about children having decent homes at all is when they are attempting to them away from gay households.

That tells me either these religious right groups and their supporters are willfully forgetting children in foster care or that they don't really care about whether or not children actually are placed in good homes.

Just as long as they aren't placed in gay homes.