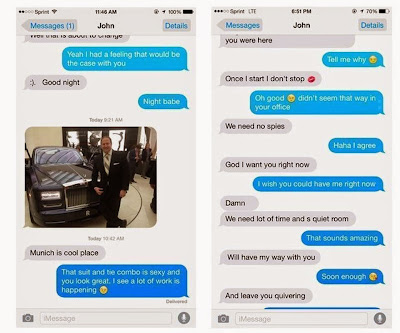 The above "sexually charged text messages" are from Missouri Speaker of the House John Diehl to a college intern. Diehl is married with three children. Naturally, the intern he traded messages with is NOT his wife.

It's certainly a juicy scandal, made more apropo to the lgbt community because according to Right Wing Watch:

Earlier this year, Diehl and the president pro-tempore of the state Senate filed an amicus brief in defense of the state’s anti-gay-marriage amendment, leading the Missouri Family Policy Council, the state affiliate of the Family Research Council, to praise the speaker “for demonstrating moral leadership and true integrity in standing up for the sacred institution of marriage and the family values of the people of Missouri.” The state affiliate of the Southern Baptist Convention thanked him for “fighting to defend biblical marriage.”

. . .  Diehl also co-sponsored a 2012 bill to ban Gay-Straight Alliances in public schools, which read: “Notwithstanding any other law to the contrary, no instruction, material, or extracurricular activity sponsored by a public school that discusses sexual orientation other than in scientific instruction concerning human reproduction shall be provided in any public school.” The St. Louis Post-Dispatch at the time called it a “hateful and unconstitutional attack on individual rights” and slammed Diehl for backing “a loathsome bill in a cynical attempt to garner support from the right wing.”


As with the case of SC Rep. Mark Sanford, LA Senator David Vitter, etc., etc., perhaps some folks need to stop accusing gays of attempting to ruin marriage and instead focus on those who claim to be defending it.
Posted by BlackTsunami at 3:09 PM No comments:

Why Tim Cook Should Threaten to Shut Down Apple Campus Amid Texas Anti-Gay Crusade - Texas has gone anti-gay crazy. Michelangelo Signorile thinks Apple CEO and out gay man Tim Cook can do something about it. What do you think?

How The FDA’s Revised Blood Ban Caters To Religious Anti-Gay Beliefs - Then again . . .

Eureka Springs Upholds LGBT Protections; Anti-Gay Leader Blames Threats Against Christian Voters: VIDEO - THIS has been the talk of the morning. BTW I don't buy the claim that "Christians were scared to vote."

Fischer: Support For Gay Rights Is 'Evidence That Satan Exists' - No, honey. The fact that you have a job shows that Satan has an evil sense of humor.
Posted by BlackTsunami at 9:18 AM 3 comments:

Dear Phyllis Schafly, a lady always knows when to leave. Take the hint.

I know that conservatives assume that Phyllis Schafly is some type of arch-goddess of their movement, but there comes a time when some folks just need to be put out in the pasture.

The legendary Lena Horne is reputed to have once said "A lady always knows when to leave the room."

Ms. Schafly, take the hint. Or at least remember your gay son when you spin such trash as below:

In an interview with conservative radio host Chuck Wilder on Monday, Eagle Forum founder Phyllis Schlafly said that lawsuits against business owners who violate nondiscrimination measures by refusing service to gay and lesbian customers show that marriage equality advocates ultimately seek “to wipe out the Christian religion.” “Have you noticed that only Christian small-businesspeople have been harassed and sued for refusing to participate in same-sex marriages even though our fast-growing immigrant populations, you know of Muslims, Hindus and other faiths are also opposed to that concept?” Wilder asked. “The use of same-sex marriage to attack Christian businesses but not businesses run by members of other religions demonstrates what is really driving the demand for the new constitutional right to same-sex marriage.” “Well, that is right,” Schlafly responded. “They want to wipe out the Christian religion. And most of these other religions do not recognize same-sex marriage. I assume there are some Muslim bakers and photographers and other people who have been harassed, but they’re not being attacked and they’re not being criticized.”

Posted by BlackTsunami at 4:55 AM 3 comments: