'Trump or Clinton - will the lgbt community do the right thing?' & other Mon. midday news briefs

Editor's note - Barring something monumental happening, Holy Bullies and Headless Monsters will not be posting any items tomorrow. Although, I hope to post something really joyous tomorrow evening. 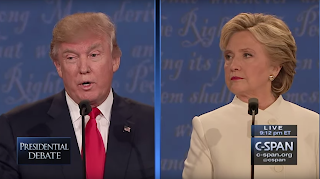 Trump Or Clinton? The Future Of LGBTQ Rights In America - Yes we do. Avoid folks - even if they are of our own community - who seek to play divide and conquer with various facets of our community. Listen to each other, respect each other, learn from each other. In spite of what happens on election day (and you know who I am rooting for and will vote for) never assume our fight for equality is at an end.

HB 2 top issue among trans N.C. voters - No one has talked about how HB2 could decide the general election in North Carolina. It may play a pivotal role.

Why anti-gay discrimination is illegal, in one short footnote - This is fascinating.

The UN’s New LGBT Rights Watchdog May Be About To Lose His Job - The anti-lgbt industry has people working on this even level. I know this for sure because one of them put me on block a while back.

Meet the Oprah of China, Who Happens to Be Transgender - WONDERFUL article!

One last point - The progress we have made did not come via a magic wand or rubbing on a magic lamp. It took very difficult work by patient people who stood firm in the face of all sorts of hatred and ignorance. If you want to see that progress continue, get off your butts and vote tomorrow (or today if you are able). We want fast change but more often than not, change happens slowly and incrementally via the efforts of those not willing to take second class status. And yes, consider your sexual orientation as a factor when you vote. There is NOTHING wrong with that. As I said before, you all know who I am voting for (Hillary Clinton). I hope you feel and do the same. Still, get off your asses and vote.  Power is not handed over generously and neither equality. And if you aren't willing to fight for yours, then maybe you don't deserve equality.
Posted by BlackTsunami at 9:15 AM 1 comment:

As this election ends (thank God), nine states are projecting an ugly vision for the lgbt community.


Nine states led by Texas on Thursday filed a legal brief in support of a controversial “religious freedom” law in Mississippi.

Phil Bryant, Mississippi's Republican governor, is appealing the July ruling that blocked the law hours before it was set to take effect.

The Protecting Freedom of Conscience from Government Discrimination Act (House Bill 1523) allows businesses to deny services to LGBT people based on their “sincerely held religious beliefs or moral convictions.”

In the brief, Texas Attorney General Ken Paxton and Republican officials from eight other states asked the 5th Circuit Court of Appeals to reinstate the law.

“Americans have the right to peacefully live and work according to their deeply held beliefs, in accordance with the religious freedoms enshrined in our Constitution,” Paxton wrote.

. . . Texas, Louisiana and Mississippi are overseen by the 5th Circuit. A ruling upholding the lower court's order would threaten the plans of socially conservative Republicans in Texas to pass similar laws when lawmakers return to Austin in January.

Posted by BlackTsunami at 5:09 AM No comments: