Huckabee continues to hide his homophobia behind religion


Folks who read my blog know that I have a special dislike for Mike Huckabee.

No I have never met him but I still regarding him phonier than most anti-gay activists. With Peter LaBarbera, Brian Brown, Linda Harvey, and most other anti-gay activists, the lgbt community know where we stand.

Huckabee is that certain type of noxious homophobe who attempts to make his bigotry seem perfectly sound even though he is saying and doing some of the most offensive things against the lgbt community. He attempts to use his "Christianity" as an excuse for all of his homophobia. Take the following he put on his facebook wall for example: 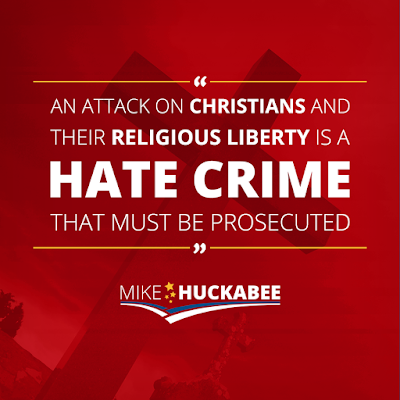 I'm willing to bet that Huckabee will gets lots of press for this. Of course the press won't ask him about his history of demonizing the lgbt community


‘I don’t stand alone': County clerks invoke religious freedom to ignore law on same-sex marriage - So what if you "aren't alone." Gay couples have the law and the Constitution on their side. Actually we could easily sidestep this petulant diversion by, while agreeing some clerks may have religious objections to issuing marriage licenses to gay couples, demanding that there be a mechanism or procedure in place which will still allow gay couples to receive licenses with the same ease as their heterosexual counterparts. We shouldn't surrender the fact that we are the most important element in this factor and our rights rank right up there with the rights of opposing county clerks.

Girl Scouts Return $100,000 Donation from Transphobic Donor - Huge kudos to the Girl Scouts. THIS is standing on principal.

Asking Hate Groups About Marriage Equality Isn't Balance, It's Bad Journalism - I totally agree with this. I don't think they should be kept off the air. I do think that they should not be mis-identified as a "traditional values" group. I also think they should have to debate lgbt-oriented spokespeople more often. And at the very least, there should be some focus on THEIR deceptive tactics  for a change.

These Religious Leaders Are Celebrating Marriage Equality - ANOTHER thing the media could do is to stop letting the religious right be the only religious voice heard on television. There are plenty of lgbt-friendly clergy out there being ignored.

Religious Right Pundit: 'Victims Of Homofascism' Will Take To The Streets Against Gay Marriage - have you noticed that those calling for 'civil disobedience' over marriage equality aren't even TRYING to lead by example?

Conservatives Explain Why They Lost On Marriage - Notice how quickly they shift to new talking points.


Posted by BlackTsunami at 9:15 AM No comments:

On one hand, I love how Jon Stewart and The Daily Show calls out conservative hypocrisy and talking point babble over the recent SCOTUS decision on marriage equality. However, on the other, it demonstrates just had bad American journalism is. It's a shame when a comedy show does much more quality work to educate the American people than the folks who are paid handsomely to do so.

Posted by BlackTsunami at 4:34 AM No comments: