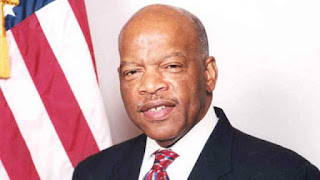 Civil Rights legend and long-term Congressman John Lewis passed away last weekend at the age of 80. Tributes from all over poured in to honor this wonderful man who spent a good portion of his life fighting for justice and equality for all people, including the LGBTQ community. And unfortunately, with the good comes the bad, courtesy of right-wing radio host and all-around bozo, Jesse Lee Peterson. Peterson, a black conservative who is the head of a phony organization, makes a name for himself by being saying things about black people which white racists love to hear.

“I can think of many words to call ex-Congressman John Lewis,” Peterson said. “Hero would not be one. Well, maybe he is a hero, because she [Oprah] is a daughter of Satan and he is a son of Satan, so maybe in that world, he’s a hero in that he pushed evil.”

“Congressman John Lewis—he dead—was a race hustler, a loser,” Peterson continued. “John Lewis was not a hero. He was a zero, not a hero. … We knew he was a race hustler. He divided the races, he did not unite them, and just because he marched in a rally down in Alabama or Georgia or wherever he was, that doesn’t make him a hero. John Lewis did not do anything to earn becoming a [member of] Congress for so long. He didn’t make things better. He made them worse.”

“John Lewis did not apologize for dividing the races, for calling America a racist society,” Peterson added. “He was a phony. He was a race hustler. I don’t know where he went when he died, but I do know according to all reports, he dead. But he was not a good man. I don’t know what he said to God before he died, but I know he did not apologize to this country for dividing and lying and doing what he did to America. He used black people for his own personal gain. John Lewis was an evil man.”

Pompeo says U.S. should limit which human rights it defends - I am not liking this direction at all.

John Lewis Was A Vocal Champion Of LGBTQ Rights During A Time When It Had Little Public Support - More about Congressman Lewis.

LGBTQ-Inclusive Movies Rise As Racial Diversity Plummets, GLAAD Report Finds - Folks like me can't have "one or the other." We have to have both - LGBTQ-inclusive movies and racial diversity.