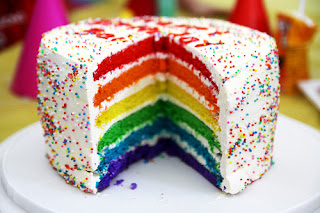 The Women Who Challenged Sweet Cakes on the Cost of Their Battle - This battle was not about cakes any more than Rosa Parks refused to stand up simply because she was tired. And it's a shame how this situation was distorted:

"We’re not political people, never wanted this attention, and only filed a claim with Oregon's Bureau of Labor and Industries after six months of relentless media attention and harassment. Meanwhile, the Kleins quickly became media darlings of the right wing. Conservative groups flew them out to appear at events, Ted Cruz featured them in a campaign video, and their fundraising page raised over $600,000. In contrast, we became the target of hateful, violent threats and a daily onslaught of negative calls and emails from around the world. Over the past three years, we have received several thousand Facebook messages calling us fat, evil, and dumb — some with threats so violent that we have sincerely feared for our lives, moved houses, and lived in hiding in hopes of protecting our family. "


Transgender Students and Parents Say the State Is Putting Children in Danger - Another case in which the anti-lgbt industry and their supporters grab the mantle of concern while those whom we should be concerned about are being put in danger.

Billboards cause controversy in Waco's LGBT community - 'Ex-gay' billboards. And check out the semantic game of evasion played by the organization behind it. They claim to have no problem with gay folks except for the fact that they think we shouldn't exist.

10 Quick Lesbian Coming Out Stories That Will Make You Smile - This is a wonderful way to wrap up today's news briefs.
Posted by BlackTsunami at 9:08 AM No comments:


Recording artist Sia honors the victims of the Orlando Massacre with this powerful video to her song, 'The Greatest.'

The clip starts on a black screen with the words #WEAREYOURCHILDREN printed across. Then, we see a crying Ziegler wiping paint under her eyes, as if crying rainbow tears, or perhaps applying warpaint for battle. A large group of kids lies on the ground below her, motionless, and she begins screaming (though we don’t hear her), urging the kids to get up.

Once the music starts, the group begins moving in unison, with Maddie leading the charge. Attitude reports that the children represent the victims killed in the deadliest mass shooting in America’s history ― “49 dancers for 49 lives lost,” as the magazine put it. With lyrics like, “Don’t give up, I won’t give up / Don’t give up, no no no” and “Running out of breath but I / oh I I got stamina,” it’s hard not to draw those parallels.

The kids dance through an old house, eventually coming together as one group. They jump up and down, moving together as a single entity (much like individuals would at a club as music blares through the speakers) before collapsing to the ground, leaving behind the haunting visual of bodies on the floor.

Posted by BlackTsunami at 4:46 AM No comments: