I think we can file this one under "Gee, guys. You aren't helping."

Recently, Franklin Graham faced a firestorm of criticism over he made about openly gay presidential candidate Pete Buttigieg. Much of the criticism pointed out the hypocrisy of Graham attacking Buttigieg's sexual orientation as being sinful while simultaneously heaping praises on Donald Trump, whose behavior as president hasn't been exactly Christian.

The criticism was so intense that it led Graham to meekly backtrack. But now the hate group known as the American Family Association has a petition online asking folks to support Graham and show him a little love:

National Review writer David French has wrongly accused Franklin Graham of having a double standard by not being openly critical of President Trump's past while being public in his criticism of other politicians.

French cites Graham's criticism of the moral failings of former President Bill Clinton and Presidential contender and South Bend, Indiana, mayor Pete Buttigie. In his biased brand of yellow journalism, French unjustly contends that by not holding President Trump to the same moral standard, Graham has lost his influence as an evangelical witness.

Certainly, no one would agree that President Trump's past is a perfect model of morality, but French has attacked and mischaracterized Mr. Graham's integrity by unjustly comparing apples to oranges. Since our current president has taken the oath of public office, he has come nowhere near the glaring moral indecencies of Clinton while he served in office. Buttigieg is an open homosexual who claims God made him "gay" and is a better Christian because of it.

Graham is unquestionably a godly man of impeccable integrity. His decades of faithfulness to the gospel and the Great Commission are what make him one of America’s most beloved men.

This character assassination by David French is unconscionable and should not go unchallenged.

I urge you to stand with us in showing our appreciation and love for Franklin Graham by signing our petition to this great man of God.


No doubt AFA will get lots signatures on this petition, but I'm all for it.

Graham got rightfully ratioed because of his hypocrisy. And with sentences like Since our current president has taken the oath of public office, he has come nowhere near the glaring moral indecencies of Clinton while he served in office, the AFA is merely show its own hypocrisy as well as the hypocrisy of anyone who signs this petition.

Unless, that is, you forget all of Trump's misdeeds. His over 1,000 lies, his obstruction of the Russia investigation, his refusal to release his tax returns, his callous behavior towards Puerto Rico after the hurricane, his lies and attacks on immigrants, his praising of dictators, etc, etc.

It doesn't matter how many people AFA gets to sign its petition because the petition is a lie. It's a piece of pandering crap designed to soothe Graham's wounded ego. But neither 100 nor one million signatures will remove the stain and stench of hypocrisy from Graham. It's something he rightfully earned.
Posted by BlackTsunami at 6:11 PM 1 comment:

This video was made last year, but it is very pertinent to events happening currently to the LGBTQ community. Recently, the Department of Health and Human Services under the Trump Administration announced what it called a "religious freedom" rule which would allow doctors, nurses, and other healthcare workers to opt out of providing services or procedures which they claim would violate their faith. This rule could negatively affect LGBTQ health, particularly those with HIV and the transgender community.

That's why the city of San Francisco is suing to block it, calling the rule extremely broad. The video above focuses HHS official Roger Severino, one of the people behind this rule. It shows that based upon his history of anti-LGBTQ activism before coming to HHS, our community probably does have a lot to fear from this "religious freedom" rule.

One more thing - at 6:12, that is the Heritage Foundation's Ryan T. Anderson with Severino. Anderson also has a very long history of anti-LGBTQ activism, including publishing a junk science book attacking the transgender community.
Posted by BlackTsunami at 4:27 PM 1 comment: 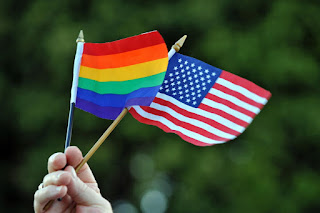 BREAKING: Sultan of Brunei says country will not enforce its anti-gay death penalty - A victory for us. For now. It shows the power of the boycott but will our people be safe?

Furman professor: Many LGBTQ students in SC are harassed. More must be done to protect them - Yep. So true.

Fox anchor Shannon Bream hosts another anti-LGBTQ group figure: Heritage's Kay Coles James - Bream strikes again. But this interview will haunt James. Trust me. She claims to have a gay son, but yet is employed by an organization which undermines LGBTQ equality.

Pete Buttigieg Is Exposing Tensions In The LGBTQ Movement - They were already there. Now let's have a nice conversation.
Posted by BlackTsunami at 8:34 AM No comments: