Florida legislators passed a law protecting the rights of people of faith who won't violate their religious beliefs in order to accommodate homosexuals wanting to marry.

Pastor Eddie DelValle of With Love Ministries says the movement in part relates to Kim Davis, the Kentucky county clerk who was ordered to jail for refusing to issue same-gender marriage licenses.

"I think the agenda of the LGBT movement was to silence the church, silence Christians and make us powerless in the culture and society," he says. "But instead the states now have given us full protection where we cannot be taken to court or civilly sued if our conscience is violated religiously."


The law "protects" pastors from being forced to marry gay couples. But the law is useless and passing it was a waste of time. There are no laws, ordinances, provisos, etc which demand that pastors have to marry all couples who come before them. That sort of thing  would be illegal due to the First Amendment of the Constitution.

Also, I find it ridiculous that DelValle and One News Now attempts to make the connection to Kentucky clerk Kim Davis. She is an elected official and not a pastor, therefore it was her job to provide marriage licenses to all couples whether they be gay or heterosexual.


“This is just unneeded regulation. It is just a crazy thing.”


He also compared the law to passing a bill against aliens from outer space landing in Florida.

It just goes to show how people can be manipulated by fear. Lgbts do not want to silence Christians. In fact, some of us ARE Christian. We just want our right to marry, just like everyone else. And now that we have won that right, we are going take full advantage of it.

We could care less which pastors don't want to marry us. We are too busy having weddings with the ones who do.

Posted by BlackTsunami at 3:03 PM No comments:

1. Because of a personal emergency, this will be the only post on my blog until late this afternoon.

2. Some folks have asked will I weigh in on the Democratic primary on this blog. Due to the extremely contentious nature of the primary - barring any unforseeable event which needs to be talked about - this blog is officially declared a NO "Hillary vs. Bernie"  Zone. This blog is about the lgbt community, fighting the religious right, and securing our equality and dignity. There will be no distractions. Any comments steering anything to a Hillary vs. Bernie situation will also not be posted. 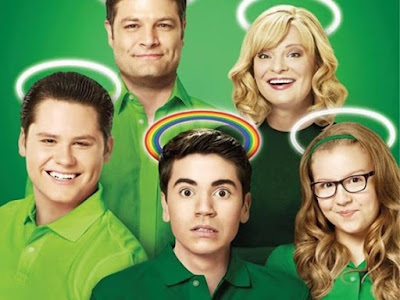 Taking a break from calling us hateful if we boycott things, the anti-gay hate group American Family Association has declared war on the ABC sitcom The Real O'Neals:

If you didn't know who Dan Savage is, it's probably a good thing. But right now we need you to familiarize yourselves with one of the cruelest, most vile political activists in America.

Why? Because ABC and Disney is airing a sitcom Dan Savage developed loosely based on his life.
A perusal of Dan Savage's work reveals a career built on advocating violence — even murder — and spewing hatred against people of faith.

Savage has spared no one with whom he disagrees from his vitriolic hate speech. We have examples, but be warned, they are extremely graphic and offensive.

. . . Despite his extremism, vulgarity, and unabashed encouragement of dangerous sexual practices, ABC's newest sitcom with Savage as its executive producer is now airing on Tuesday evenings at 8:30/7:30 p.m. CT.

"The Real O'Neals" mocks Christianity and insults Catholicism. AFA recognizes this show ridicules people of faith, and Christians across America are offended by it.

It is almost impossible to describe the depth of depravity found in the sitcom "The Real O'Neals." It is impossible to list them all, so here are a few scene descriptions from the show:

AFA goes on to talk about contacting one of the companies which pays for advertising on this show to let them know that they supposedly support "bigotry and animosity" against Christians.

Personally, I'm jealous. I thought I was one of the cruelest, most vile political activists in America. Anyway, I find The Real O'Neals to be very comical and refreshing. But look at this short clip judge for yourself:

Posted by BlackTsunami at 4:58 AM 3 comments: