Is Pawlenty counting on a homophobic backlash to put him in the Oval Office? 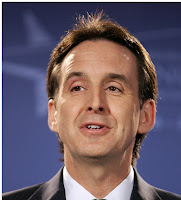 Perhaps I am being too paranoid but it's obvious to me that former Gov. Minnesota Tim Pawlenty is counting on history while making his presidential bid.

Remember, it was the backlash against the civil rights movement (some unfairly grouped it with the excesses of the 60s) which led to Nixon's Southern Stategy and subsequently his election as President in 1968.

With the recent victories of the lgbt community over those who would deny us our equality (i.e. the repealing of DADT, overturning the law against gay adoption in Florida, overturning of the Prop 8 vote), some may think that a backlash against us is inevitable.

How else can one explain Pawlenty's recent moves? Last week while on the tour of his book, Pawlenty talked with Bryan Fischer of the American Family Assocation. Fischer has been called out numerous times for his vicious anti-gay comments, including claiming that lgbts formed the building blocks of the Nazi Party.

However, Pawlenty didn't address Fischer's homophobia because he was too busy cozying up to him, even to the point of promising to reinstate DADT should he be elected as president.

Today, Pawlenty took his wooing of the anti-gay forces a bit further. According to People for the American Way's Right Wing Watch:

Pawlenty will continue to court anti-gay leaders by meeting with Iowa’s Bob Vander Plaats and his organization, The Family Leader. Vander Plaats told the Des Moines Register that his group will be “hosting Governor Pawlenty in Iowa” in early February to discuss “pro-family issues, all the way from life and marriage to economic policy and energy policy.”


After losing the race for the Republican nomination for governor, Vander Plaats became a leader of Iowa’s Religious Right after he coordinated a successful campaign to block the retention of three Iowa Supreme Court justices who supported the Court’s unanimous ruling to legalize same-sex marriage. Vander Plaats, who a former aide said is “obsessed with the gay marriage issue,” has since called for the removal of the entire Supreme Court because of the Court's decision in favor of marriage equality. The Family Leader is the parent organization of Marriage Matters, the Iowa Family PAC, and the Iowa Family Policy Center, an organization that attacks “the public health crisis of same-sex activity” and tells church groups that they can “protect your children” from “homosexual activists.”

It's too early right now to see if Pawlenty's efforts will yield any fruition, but it is safe to say that for the 2012 Presidential election, he considers the lgbt community to be food on the menu.

Posted by BlackTsunami at 2:57 PM No comments:

SCOTUS Rejects Appeal from Same-Sex Marriage Opponents in D.C. - I sincerely hope that anti-gay pastor Harry Jackson is getting good money from whoever is causing him to make himself look like a fool.

Globes had 'offensive agenda', says group that finds glee in denying gay kids are all right - Oh look. The Golden Globe Award reveals the lgbt plan for world domination and indoctrination. And I still haven't received the memo as of yet.

'Christian' owners of B&B in U.K. acted unlawfully when they denied room to gay couple - Homophobic discrimination gets a kick in the face, British style.

South Carolina Equality, a group dealing with lgbt education and advocacy in SC, has come out with a monumental survey of over 1,000 of the state's lgbt community.

Christine Johnson, head of SC Equality said that she has already begun conversations with state lawmakers in order to get the ball rolling on anti-bullying legislation.

However, according to South Carolina Republican strategist Wesley Donehue, this may be a difficult fight. Donehue said the following in a piece at ProcessStory.com:

There are many Republicans in the General Assembly who will flat out try to kill any bill providing more gay rights. They aren’t the problem for the SC (Equality). Their problem will be the many forward-thinking Republicans who are sympathetic to their cause, but won’t go for putting more laws on the books and creating a special protected class.

Donehue's comments no doubt leaves many (myself included) bewildered, particularly in light of a legislative battle which took place last year over a bill regarding teen dating violence.

In 2009, a bill was pushed through the SC House of Representatives that required schools to create teen dating violence prevention policies.

The bill was a good idea, but it got tainted when a state representative, Greg Delleney, pushed an amendment through requiring the bill to pertain to only heterosexual relationships, ergo excluding lgbt relationships

Delleney said he did this because he was afraid that without this requirement, schools would have to teach children about same-sex relationships.

So while Donehue may have been accurate in claiming that SC Equality will have a difficult fight ahead in getting proper legislative responses to its survey, his reasoning seems to be a bit off.

Being considered as a constituency worthy of protection is not the same thing as being put on a pedestal above other constituencies.

The spooky thing will be to see which members of the SC Legislature actually share Donehue's warped point of view.

Posted by BlackTsunami at 4:57 AM No comments: