NOM pledges to give 'resources' in Minnesota anti-gay marriage vote The one thing I tell folks tracking the National Organization for Marriage is to not allow this organization's words to get under their skin, such as the following statement gloating about recent happenings in Minnesota via NOM President Brian Brown:

“We commend the bi-partisan majority in the Minnesota House of Representatives that voted Saturday night to put an amendment on the ballot preserving marriage as the union of a man and a woman. The House joins a bi-partisan majority in the state Senate, and the amendment will now go before voters in November 2012. NOM looks forward to supporting the campaign and lending our expertise and resources to those of allies in the state. We will have a thorough, respectful, discussion with the voters of Minnesota on all the reasons why the definition of marriage should be preserved as the union of a man and a woman, and to explain the risks to Minnesotans if they allow an activist judge or liberal legislators to redefine marriage in the future without public approval.

The key is to read these statements and pay attention to what they are actually saying.

Of course we know that when NOM talks about "lending its expertise and resources," this most likely means blanketing the state with lying flyers, brochures, and commercials falsely accusing the lgbt community of "recruiting children" through gay marriage. Meanwhile NOM talking heads like Maggie Gallagher will go on local talk shows and claim sweetness and light while she espouses that  NOM  "only wants to protect marriage."

All while all of this is happening, "ordinary citizens" on their own volition (wink, wink, nudge, nudge) will point out erroneous incidents in which they claim that Minnesota's lgbt community are acting like bullies via columns, letters, to the editors, and statements which NOM will publish on its blog (making sure to edit out statements which will call attention to the falsity of these charges.)

Of course his statement, Brown omitted NOM's partner in this venture, the Minnesota Family Council.

So I guess that means we won't be hearing any disavowment from NOM regarding the Minnesota Family Council's hateful belief that gays engage in bestiality and pedophilia when we are not consuming urine and feces.

So much for Brown's claim of having a respectful discussion.

Posted by BlackTsunami at 4:24 PM 3 comments:

Ten Mailers New York Should Use To Fight NOM And Win Marriage Equality - Queerty has designed several flip cards which not only can be used to fight NOM in New York but also every other place that organization rears its nasty head. Some cards are below: 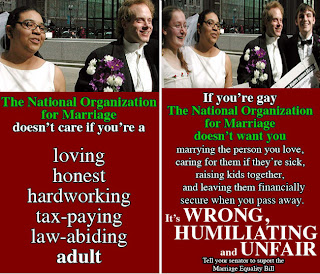 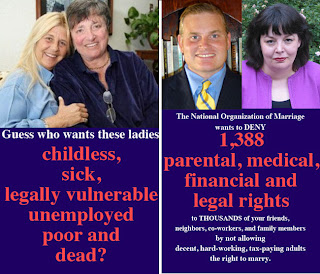 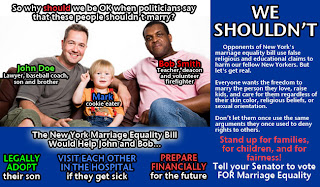 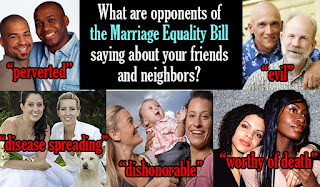 ‘Coming Out’: Gay Teenagers, in Their Own Words - The religious right generally boggarts the conversation. Finally lgbt children get a word in edgewise.


If it walks like a ban and it stigmatizes like a ban... - Convenient. Days after the Minnesota Legislature votes to put gay marriage on the 2012 ballot, a columnist just happens to write a piece repeating NOM's talking point of alleged "gay bullies."

An anti-bullying initiative NO ONE needs

The Alliance Defense Fund (ADF) has submitted a Model Anti-Bullying Policy to the U.S. Civil Rights Commission Briefing on Bullying that, unlike others submitted by those pushing a political agenda, is for all students.

ADF believes some activist groups are perverting well-intended policies to promote homosexually-based programs in public schools. The "Welcoming Schools" program from the Human Rights Campaign and the "safe schools" initiatives of the Gay, Lesbian and Straight Education Network (GLSEN) are two examples.

If I was a member of the group ADF submitted their bullying policy to, I would shred it and pretend that it never arrived. The "initiative" is four pages long (counting the introduction letter). The introduction letter spends more time castigating the lgbt community than addressing the problem of bullying. In part it reads:

Efforts to indoctrinate our society into supporting homosexual behavior have been ever increasing over the last several years. Many of these efforts have targeted those most vulnerable and impressionable to this indoctrination-our children.

Schools are being transformed from places of safety and learning to places of unprecedented sexual education. Children as young as kindergarteners are being subjected to books, programs, and teachings designed to undermine traditional notions of sexuality and family.

Bullying has always been a problem within our schools. Many schools have rightly responded to these problems by implementing policies aimed at reducing and/or punishing bullying. These well intentioned policies, however, are now being perverted and used as cloaks for the promotion of homosexually-based programs in our schools.

Examples of these efforts include the "Welcoming Schools" program by the Human Rights Campaign and the "safe schools" initiatives by the Gay, Lesbian and Straight Education Network (GLSEN). Other homosexual behavior advocates are demanding that protections for "sexual orientation" and "gender identity" be inserted into existing anti-bullying policies so that inappropriate, sexually-based materials can be promulgated to our children.

Unfortunately, when presented with demands to adopt anti-bullying laws, policies, and programs that further the demands of the homosexual agenda, many legislators, school board members, and educators are not properly equipped to respond to these demands. In many instances, anti-bullying policies devised by advocates of homosexual behavior were adopted by policymakers where no competing or discerning voice to the contrary was heard. This trend cannot continue.

And the initiative itself is functionary - it has nothing on training or preventative initiatives. Nor does it provide any research in the forms that bullying can take.

All in all, it reads like something parsed by a high school student who discovered his assignment is due in 30 minutes and so subsequently decides to "fake it until he makes it."

Unfortunately "faking it" seems what the Alliance Defense Fund is trying to do. Its initiative has less to do with protecting students and more to do with eliminating any mention of lgbt students in our nation's schools.