On Tuesday, Virginia high school students sent a message to Governor Glenn Youngkin. They are not in favor of his policy which rolls back the rights of LGBTQ students.

From The Daily Beast:

Thousands of Virginia students walked out of school Tuesday to protest anti-LGBTQ policies introduced by Gov. Glenn Youngkin, with more than 90 schools participating. The new school policies, unveiled in early September, require parents to sign off on names, pronouns or gender identities not aligned with students’ official records, and otherwise requires them to be referred to by their biological sex, potentially preventing them from using facilities or programs of their preferred gender.
The policies are a walk back from the previous administration’s guidelines, which allowed students to identify without “any substantiating evidence.” “While students exercise their free speech today, we’d note that these policies state that students should be treated with compassion and schools should be free from bullying and harassment,” Youngkin spokeswoman Macaulay Porter said in a statement.

In addition to the walk-out, students were very vocal about the damage Youngkin's policy would cause:

“We decided to hold these walkouts as kind of a way to ... disrupt schools and essentially have students be aware of what’s going on,” said Natasha Sanghvi, a high school senior and member of the Pride Liberation Project, which helped organize the resistance effort.
Sanghvi said the existing, more permissive state policies, which were adopted under former Democratic Gov. Ralph Northam's administration, had been powerful in helping students feel affirmed in their identities at school. The new ones made public earlier this month, she said, have the potential to harm “every single queer student in the state of Virginia.”

Posted by BlackTsunami at 4:33 PM No comments: 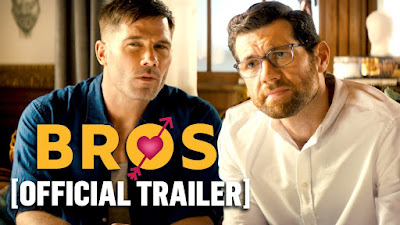 Trolls are trying to review bomb his gay rom-com & Billy Eichner has a solution - Those folks don't want us to have anything.
Right-wing media fearmonger against new clinical recommendations for gender-affirming medical care - You can always set your watch to it.
Hatred for Queer Community on Display at Rally in Dearborn​ - THIS is sad. Keep fighting, y'all.
Parents Confused, Outraged About Ohio School's Letter Regarding LGBTQ+ Policies - THIS, on the other hand, is good.
Cuba legalizes same-sex marriage in historic referendum - WOW! Good for Cuba!
Posted by BlackTsunami at 8:42 AM No comments: