The South Carolina lgbt community can almost taste marriage equality coming to our state. It's like tasting champagne and once you have tasted champagne you are supposed to receive, you don't necessarily feel like going back to that bitter water someone thinks that you deserve.

“The Fourth Circuit’s decision means that same-sex couples in South Carolina should be shopping for a caterer, not a lawyer. Governor Haley and Attorney General Wilson cannot continue to ignore the rule of law. Fortunately, they have run out of cards to play—we’re urging the court to allow same-sex couples in South Carolina to marry without any further delay,” said Beth Littrell, Senior Attorney in Lambda Legal’s Southern Regional Office based in Atlanta. “The state doesn’t have any credible arguments for a court in South Carolina to entertain.”

“The Governor and Attorney General are playing politics with our families and it’s shameful,” said South Carolina Equality lawyer Nekki Shutt, partner at Callison Tighe & Robinson. “Instead of celebrating and planning weddings, same-sex couples all over South Carolina are holding their collective breath—and they have been waiting long enough.”

“We were excited after our application was accepted on Wednesday to realize we could really start planning our wedding. We could set a date and a location and start making deposits—all that came to a screeching halt when we couldn’t get our license on Thursday. It’s terrible that the officials who are supposed to look out for the interests of all South Carolinians are instead making a political point at the expense of my family and thousands of families across the state,” said Lambda Legal client Colleen Condon.

When it comes to lgbt equality issues, South Carolina catches a lot of flack. And the vast majority of it is somewhat deserved. But what folks don't seem to realize when they make ugly jokes about my state is that these statements of mirth causes them to miss the fact that we have a thriving and awesome lgbt community which fights tooth-and-nail for equality. That is the most important thing. Folks tend to forget that places which receives praise for being lgbt-friendly didn't necessarily start off that way.  Unheralded groups of determined folks plowed through the thick weeds of homophobia and created the clear paths of lgbt culture we hear about in places like New York or the Castro.

Instead of laughing at those of us who live places not necessarily seen as lgbt friendly, how about a little support and a little respect for the paths of equality we are attempting to create.

Posted by BlackTsunami at 9:17 PM No comments: 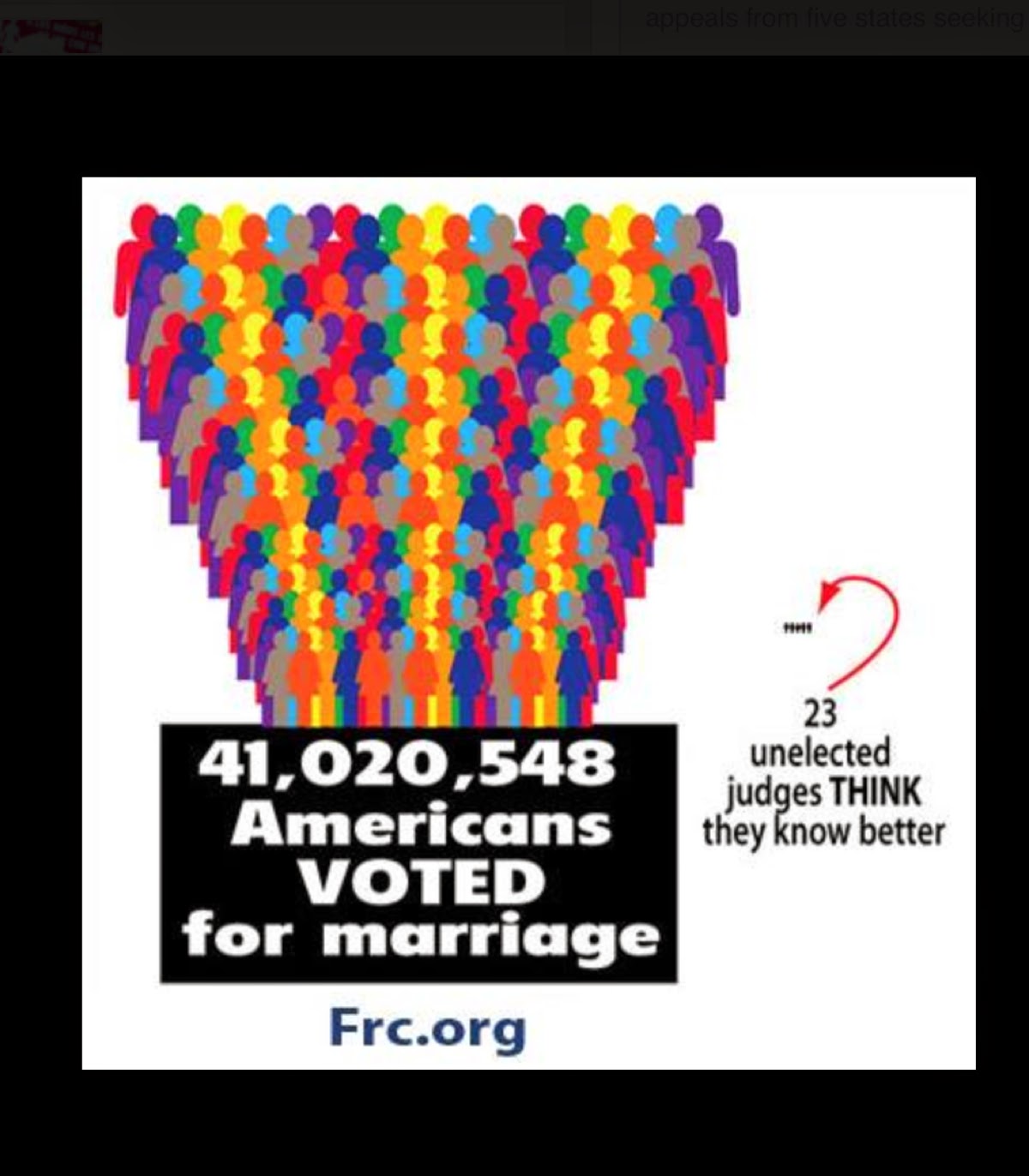 The above graphic proves that the Family Research Council either doesn't know or doesn't care about basic civics. For the record guys, people are able to challenge constitutionality of laws in courts no matter if said laws were passed by the legislature or via popular vote.

The irony is that if this wasn't the case, then no lawsuits against the Affordable Care Act (Obamacare) would be legal. And we KNOW how FRC just adores THOSE lawsuits.

South Carolina’s Countdown to Same-Sex Marriage - South Carolina seems to be determined to delay the inevitable of marriage equality in the state for as long as it takes. If this keeps up, aliens will be coming from Mars and getting married in same-sex ceremonies before we are able to in this state.


Transgender Mother Responds to Being Named 'Working Mother of the Year' - Big PROPS and congratulations to Meghan Stabler.

Schlafly: Gay Marriage Will Ruin Western Civilization - Just because Phyllis Schafly doesn't think much of her gay son's happiness doesn't mean the rest of us should value her nonsense.
Posted by BlackTsunami at 9:09 AM No comments: