By now, EVERYONE has heard and commented on the Rush Limbaugh/Sandra Fluke controversy.

Personally I think that Limbaugh, who was never a nice person anyway, got a bit egotistical and thought he could say anything about anyone, even a college student whose only "offense" was to testify at a Congressional hearing.

His comments sends a chilling message to those private citizens who may testify in the future that if their view does not jive with his or those on the right, they will be investigated and vilified.

We have seen how Limbaugh handles the vilifying part. Now, according to Equality Matters, in an attempt to defend Limbaugh's indefensible comments about Ms. Fluke, the right has targeted her via a 2011 paper she wrote which did nothing more than describe discrimination in employer coverage of transgender medical care.

The conservative Media Research Center’s Stephen Gutowski “discovered” the essay on March 5 and claimed it demonstrated that Fluke “is being sold by the left as something she’s not. Namely a random co-ed from Georgetown law who found herself mixed up in the latest front of the culture war who was simply looking to make sure needy women had access to birth control.” Gutowski claimed Fluke is “pushing some rather radical ideas. Keep that in mind as the left holds her up in the spotlight”

. . . The MRC post was quickly promoted by right-wing media outlets, including the Drudge Report and Fox Nation: 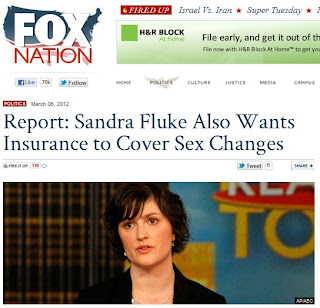 And then as if by coincidence:

And Fox News contributor Laura Ingraham brought the attack to Fox during this morning’s Fox & Friends:

INGRAHAM: Now we find out there was a law journal article written by this particular woman that seems to indicate that she believes that if you don't pay for sex change operations, gender reassignment, it's called – operations -- you also could be described as a discriminatory employer. So today the pill. Tomorrow sex reassignment surgery, perhaps. And then down the road, what other things should be covered for free?

Equality Matters quickly points out that:

Fluke’s essay is a fairly comprehensive study of various types of employment discrimination against LGBT individuals but, ironically, the one charge that Gutowski chose to highlight as an example of the “radical ideas” that Fluke is “pushing” is not controversial at all.

Check out Equality Matters to read the full post if my condensed one wasn't sufficient enough. But the gist is this - these people are sad. They aren't journalist. They are highly paid wolves who seem to enjoy destroying someone's reputation as if its a high-stakes game of Monopoly.

Posted by BlackTsunami at 3:31 PM 2 comments:

GOP Senate Candidate Claims LGBT Protections Threaten ‘Privacy Rights Of Women In Public Restrooms’ - Oh for Pete's sake, Gary Glenn! Glenn is yet another phony religious right "expert" who is now running for public office. Ugh. Glenn and I had a very interesting run-in two years ago. Read what happened when he tried to spout his nonsense to me.

Bachmann Plays Victim Card: ‘The Rhetoric Is Far Worse Against People Who Stand Up For Traditional Marriage’ - I would have been angry if the interview had actually helped Bachmann. It's not called dodgeball, girlfriend.

Generally, the National Organization for Marriage calls itself an ally of the black church when it comes to stopping marriage equality.

But how does NOM treat black churches who support marriage equality? In the case of one black church in Minnesota, the organization is poking fun at what happened when the minister stood up for gays:

Minnesota Church Loses 3/4 of Its Members For Abandoning Marriage

The left-leaning Religion News Service tries to create sympathy for a Minnesota pastor that lost most of his congregation over abandoning the great truth of marriage, even as the pastor maligns his predominantly African-American flock for "homophobia"

The article in question was actually titled Minn. Church finds the high price of supporting gays and had less to do with marriage equality and more to do with how prejudice potentially harmed a church.