Another video courtesy of the National Organization for Marriage's failed summer tour. Mercy, this is a good one from Washington D.C. Did you know that this fight is about "species" and that Satan is behind gay marriage?

One day, someone has to put all of these lovely videos together in a neat package.

More posts about those "Godly" protectors of marriage:

A little ' state-sanctioned sodomy' for your Sunday night

Posted by BlackTsunami at 5:17 PM No comments:

I'm try to get angry at this video by the right-wing Alliance Defense Fund. I'm trying to get some passion about the phony claim about how the Prop 8 decision will "force" people to accept same-sex marriage. And I'm trying to draw some internal rage over the lie that gays are "intentionally" trying to "deny children of a mother and a father."

But two things stand out.

1. Seems to me if the other side had invested more time with finding more credible witnesses as they did in filming this commercial, they would have won the case.

One more thing - it's a gay thing that I have to say this. Her ensemble has got to go. Didn't they budget for clothing?

Posted by BlackTsunami at 2:57 PM 2 comments:

Deranged: American Family Radio's Bryan Fischer: 'No More Mosques, Period.' - and speaking of ships, lgbts and the Muslim community may be in different ships in terms of beliefs but we are all in the same boat now when it comes to the religious right. 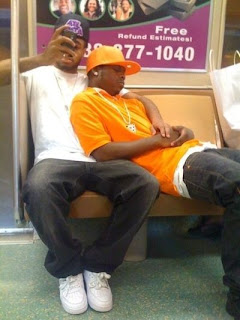 According to one of my blogger buddies, Rod 2.0, this nondescript picture is causing a nasty reaction online and demonstrates not only basic homophobic but how terrible it is for men, especially black men, to show a little affection:

The image was snapped of two young men apparently on Atlanta's MARTA and the Twitpic is entitled "No Excuse: I Don't Give a F-ck How Sleepy You Are." So far, the image has 12,400+ views and has produced  three pages of mostly cruel, homophobic and hateful comments. There are dozens more comments across Twitter and the Twitpic has migrated to gay-baiting black gossip blogs. One perennial gay-baiting blogger has slammed the two young men as "homo-thugs", ranted about HIV/AIDS and complained that "it's become nearly impossible to distinguish heterosexual men from down low thugs." Are "down-low" thugs hugged up on public transit? Probably not ...

It's a very sweet and innocent photo. According to the comments, it seems the young men's primary offense, in addition to seemingly being gay, is that they are "normal looking" and apparently in love. More power to them. It's too bad more people don't have the courage to be themselves.

Amen, Rod. There would be less ignorance and less fear if not only folks chose to be themselves but others didn't give them hell for it.

Posted by BlackTsunami at 4:54 AM 3 comments: