Politifact calls Michele Malkin out for lying about last night's rally/memorial in Arizona with President Obama - Not necessarily an lgbt issue per se but highly important. Someone with this much hatred in her heart has to have a mental problem.

Video: Haley Barbour's pride parade - After he has gotten into trouble for his racism, Barbour switches to homophobia.

Fallout of a police sting in a safe place - You simply have to read this story. It is an excellent piece about police entrapment.

Gearing Up To Stop Genocide In Uganda and Spotlighting The Family - Wayne Besen lists those responsible for that awful Ugandan anti-gay bill. Awesome breakdown.

San Francisco home to first US gay museum - We need more of these across the country.

Posted by BlackTsunami at 3:31 PM No comments: 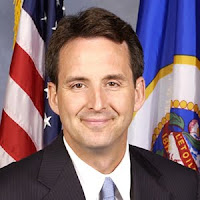 Now Fischer is infamous for his ugly statements about not only the Muslim community but lgbts. Fisher has:

•Said that “homosexuals should be disqualified from public office.” (8/5/2010)

•Said: “Hitler discovered that he could not get straight soldiers to be savage and brutal and vicious enough to carry out his orders, but that homosexual solders basically had no limits and the savagery and brutality they were willing to inflict on whomever Hitler sent them after. So he surrounded himself, virtually all of the Stormtroopers, the Brownshirts, were male homosexuals.” (5/25/2010)

As we all know, the AFA has been called an anti-gay hate group by the Southern Poverty Law Center and mostly because of comments made by Fischer.

However Pawlenty was only interested in playing nice with Fischer, even to the point of talking positively of reinstating Don't Ask, Don't Tell:

Bryan, I have been a public and repeat supporter of maintaining Don't Ask, Don't Tell. There's a lot of reasons for that, but if you look at how the combat commanders and the combat units feel about it, the results of those kinds of surveys were different than the ones that were mostly reported in the newspaper and that is something I think we need to pay attention to. But I have been a public supporter of maintaining Don't Ask, Don't Tell and I would support reinstating it as well.

Now why a prospective presidential candidate would grace a program from someone who voices such awful opinions is beyond me. Let's be clear about something - if Fischer's comments had been racist or anti-Semitic, Pawlenty wouldn't have dared to come on his program.

But since they pertaining to the lgbt community, some folks may think that these comments and Pawlenty's appearance on the program of the person making then are both okay.

And it's par for the course for Pawlenty.

Ever since the buzz about his presidential aspirations was made public, Pawlenty seems to have been on a mission to establish his so-called "conservative credentials" on the backs of the lgbt community.

On May of last year, he vetoed a bill aimed at giving same-sex partners the same end-of-life rights as married couples.

In December of 2009, he backtracked from pro-gay legislation that he signed, claiming that the bill would led to third-graders being taught by "cross-dressing" teachers.

No doubt Pawlenty's mind is on the 2004 election, when anti-gay marriage amendments sent conservative voters to the polls and gave President Bush a second term.

Someone should inform Pawlenty that the lgbt community aren't exactly as compliant as we were back then. And we won't wait until someone uses us as scapegoats before we fight back.

In other words, if Pawlenty thinks he is going to get to the White House on the backs of the lgbt community, someone told him wrong.


Hat tip to PFAW for providing the list of Fischer's comments.

Daniel Hernandez gives a lesson of reality vs. lies

I agree with President Obama's assessment during his speech last night regarding Daniel Hernandez. Hernandez, for those who aren't aware, was the intern of Congresswoman Gifford who rushed to her side after she was shot and stopped her from bleeding to death.

Whether he wants to reject the title or not, Hernandez is a hero.

More than that, his example of bravery is something to remind us of the general and basic goodness of lgbts when we have to deal with things like so:

The poor homosexuals -- they have declared war upon nature, and now nature is extracting an awful retribution (AIDS)." - Pat Buchanan

Homosexuality will always be a sexual perversion. And you say that around here now and everybody goes nuts. But I don't care. They're mean. They want to talk about being nice. They're the meanest buggers I have ever seen. - Chris Buttars, Utah legislator

The "alphas" in homosexual relationships, be they men or women, are many times recruiting younger partners. A vast percentage of those who enter the homosexual life do so after having been sexually initiated by an older person of their sex – be it consensual or not – it usually has the feel of enticement or seduction - conservative activist Kevin McCullough

When people have views supporting homosexuality, they should not be involved with youth in any way, period. Here’s why:
• They will provide inaccurate, misleading information to kids;
• They may limit a student’s opportunity to hear warnings about the behavior;
• They may advocate or model inappropriate behavior;
• They may be directly involved in the molestation of kids themselves; or
• They may be in a position to allow others to do so - Linda Harvey

In fact, most mothers are more concerned with protecting their children from homosexual activists, who insist on their supposed 'right' to propagandize young schoolchildren. - Peter LaBarbera

Hernandez serves to remind us just who are the haters and who are the ones with love in their hearts.