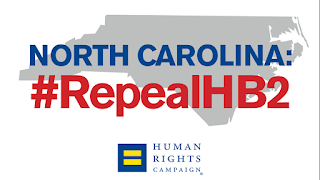 Fate of HB2 in the balance as NC lawmakers convene, Charlotte repeals its ordinance - HB2 is supposed to be overturned today. Even though I'm hopeful, I don't like the fact that Charlotte had to repeal its ordinance as part of a "deal."

Repeal of HB2 during special session could be in jeopardy - Because as the recent election has taught us, some of our governmental officials aren't above pulling some shady $#@! to get what they want.

Protections Against Workplace Discrimination Vary Wildly From State To State. See How Yours Stacks Up - Even BEFORE Trump, our fight for equality was not over. Even though we got marriage, we should be demanding more. As taxpaying Americans - some of us raising families - we should never be asking for begging, but demanding what belongs to us.

Bryan Fischer: Liberals Who Can’t Understand Why Clinton Lost Are Spiritually Blind - Says the guy who thinks children in same-sex households should be kidnapped  from their parents.

Trump urged not to cut overseas LGBT aid - We'll see . . .
Posted by BlackTsunami at 9:03 AM No comments:

During a recent interview with Oprah Winfrey, First Lady Michelle Obama said a lot of things and made a lot of good points. One point she made about the election of Donald Trump was the following:

Following the election of Donald Trump, Michelle Obama said many Americans now know what it's like not to have hope.

"We feel the difference now. See, now, we are feeling what not having hope feels like," she told Oprah Winfrey in an interview, a clip of which aired on CBS on Friday. "Hope is necessary. It's a necessary concept and Barack didn't just talk about hope because he thought it was just a nice slogan to get votes."

"He and I and so many believe that -- what else do you have if you don't have hope," the first lady added. "What do you give your kids if you can't give them hope?"

Leave it to One News Now, the fake news site of the anti-lgbt hate group American Family Association to imply that her comments were insulting Trump voters.  In an article, One News Now spotlights Jeanine Pirro, some low-budget television judge who also has a show on Fox News, to make a sad attempt to take our First Lady to task.

But what caught my attention, other than the ugly comments to Michelle Obama under the article, was the One News Now "poll." 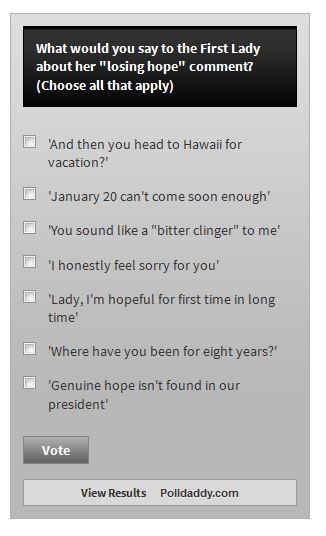 One good thing about Trump being elected seems to be all of the masks are slipping, particularly those of people and groups who call themselves Christian.
Posted by BlackTsunami at 4:57 AM No comments: