Last week, conservative radio talk show icon and all-around vile racist and homophobic human being Rush Limbaugh died from cancer. There is much debate about his impact on American politics, with some declaring him a hero while many others calling out his smears, nasty attacks, and bigoted rhetoric.

But according to the Christian evangelical (and actual hate) group the American Family Association via its 'news source' One News Now, there is no debate. According to One News Now, Limbaugh was a good Christian and a strong conservative, even if the publication has to omit several facts about his life to make this point.

The article it choose to publish, Hated by libs, adored by millions, Limbaugh leaves behind legacy, is a nauseating whitewash which paints Limbaugh as standing up for America  while wrecking "humorless liberals" with zingers which supposedly exposed their hypocrisy and hatred of American values.

Decades before President Donald Trump would blast the "fake news" intent on bringing him down, Limbaugh called CNN the “Clinton News Network” and knocked traditional news shows such as “Meet the Press,” which he mocked as “Meet the Depressed.”
How is the national media reacting to Limbaugh’s death? According to Rich Noyes of the Media Research Center, the liberals who were mocked by Limbaugh for decades are reacting just as conservatives would expect. “It's the same stuff you heard at the beginning of his career. They're now doing it at the end,” he advises. “It really is a shabby way to treat someone who has just passed away but they're sort of picking out all of the things that they've criticized over the years. They're accusing him of things like racism, which wasn't true."
Conservatives arguably should not be surprised at Limbaugh’s treatment by humorless liberals after they witnessed him mock "Environmental Wackos" vowing to ban SUVs and "Femi-Nazis" who were vowing to never marry a man.

The article omits how Limbaugh made fun of people afflicted with AIDS, the many times he referred to President Obama as "a boy," how he made fun of actor Michael J. Fox's Parkinson's Disease, the time he referred to 13-year-old Chelsea Clinton as a "dog" or the other times and people he smeared and dehumanized in the name of traditional values and American exceptionalism.
And don't even attempt to leave comments at One News Now calling out the badly written article or Limbaugh in general, as I learned after leaving mine:

As to be expected, the American Family Association is not the only one in the conservative evangelical movement attempting to paint Limbaugh as an American hero. 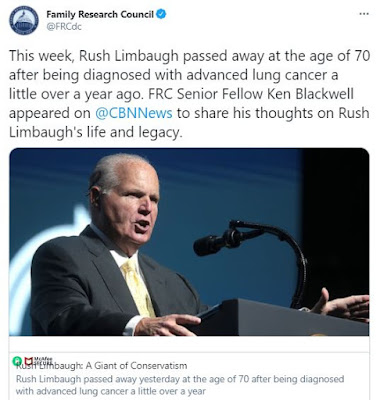 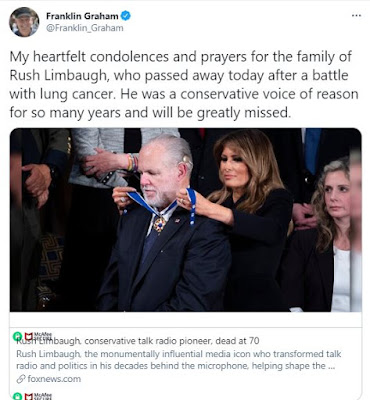 None of this should surprise anyone and this post really isn't about Limbaugh. No amount of whitewashing in the world will erase the truly nauseating legacy that this bloated, evil, lying waste spewed on this country.
This post is mostly about the lack of integrity which yet again conservative evangelicals openly show and unashamedly wave like a banner. Their "yessir, boss" behavior in the Trump era was embarrassing enough, but this new abandoning of the values they claim to uphold just so they can kiss the cold ass of Limbaugh's corpse is like a cherry on top of a huge sundae for me. It's simply more proof and more "receipts" showing just what they really are instead of what they pretend to be.
Posted by BlackTsunami at 1:06 PM 1 comment: