Don Lemon - Can an lgbt of color FINALLY get a word in edgewise?

As you all have heard, CNN anchor Don Lemon came out on Sunday. That in itself is a good thing.

The fact that he is high profile African-American is icing on the cake.

His visibility underlines a problem that I don't think many ever mention when it comes to talking about lgbts in the African-American community. You see, I don't hold to the idea that black people are more homophobic than whites or Latinos or Asians.

The problem with being an lgbt in the black community is that you never get heard. By anyone.

Heterosexual African-Americans (especially preachers) either ignore you, talk over you, or gingerly talk about you.

Some leaders in the black community will intentionally boggart the conversation.

Trust me on this one. I have been on many situations, be they panel discussions, online discussions, or radio programs, where the focus isn't on trying to exchange points of view on the issue, but rather to shut me up and not let me - or any other lgbt of color who happen to be with me at the time - talk.

It's as if these folks are scared of us. It's as if they think acknowledging who we are would lead God to come down from heaven and strike everyone down.

And even on television news programs, you hardly ever hear the perspective of lgbts of color because there is this need to pit the lgbt and African-American communities against one another as if we are two separate entities never to unite.

That's why I am happy that Lemon publicly came out. Finally, there is a voice to bring perspective to the issue of lgbts in the black community.

This interview with Lemon, conducted by Joey Behar, speaks to my point:

Posted by BlackTsunami at 2:56 PM 6 comments:

Gays and Muslims teaming up to wreck @$!? and other Tuesday midday news briefs

Turek: Gays And Radical Muslims Have United To Destroy Western Civilization - I missed the memo from National Headquarters on this partnership.

(*UPDATED) Sen. Ruben Diaz, Sr. divorces Facebook: Was it something we said? - Jeremy Hooper has homophobe Ruben Diaz on the run. Pluck that turkey, Jeremy!

Lady Gaga and the Gospel of Judas - An excellent piece written by a good Facebook friend of mine.

Scott Walker: Wisconsin Domestic Partner Law Unconstitutional - Not surprising. Scott Walker has pissed off almost everyone in Wisconsin. Why should the lgbt community feel left out?

'Homosexuals want your children' - the lie that keeps on giving

The National Organization for Marriage's lying flyer about the repercussions of allowing gay marriage in New York put a perspective on this entire so-called cultural battle for me.

And it's a point that the lgbt community needs to emphasize.

When they - be they NOM, the Family Research Council, etc - cannot stand against lgbt equality by logic, they manipulate the fears about children being harmed.

It's a highly effective scare tactic. And an old one. Check out snippets of this 1986 comic which was endorsed by the Concerned Women for America and former Congressman William E. Dannemeyer: 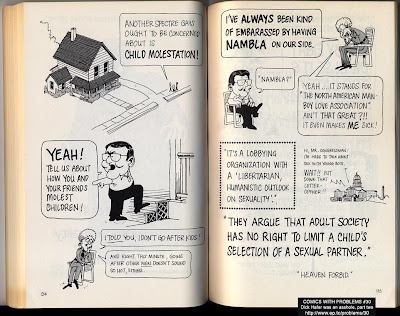 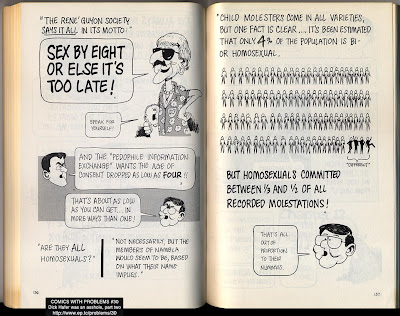 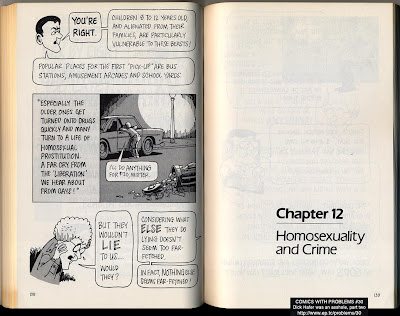 While NOM's flyer isn't as crude as the Hafer cartoon, the implications are the same - "the homosexuals are after the children of America."

It's sad in a way that after over 20 years, the architects of hatred and homophobia haven't changed their fear mongering, isn't it?

But it's also typical. We've seen this story before on so many occasions, so the lgbt community should know the ending.

Just something to keep in mind just in case some of us choose to immerse ourselves in the seductive pool of discouragement and self-pity.

No matter how much money NOM has. No matter how lies the organization tell. No matter how many legislators allow their egos to be stoked by this group, the fact of matter is that there is nothing pure or moral about NOM.

When push comes to shove, NOM exploits the fears about gays and children to stop lgbt equality in the same manner that racists exploited fears about black men raping white women in the sad effort to stop integration.

I guess that does make them bigots, huh?

Maggie Gallagher would be so disappointed.