Everyone needs to see this video of Anderson Cooper taking down Trump's reasoning for banning transgender men and women from serving in the military. It's accurate, succinct, and proves that Trump basically told a bunch of lies Watch it. Retweet it. Share it. Cooper breaks everything we need to know and talk about in less than five minutes.

Posted by BlackTsunami at 7:28 PM No comments:

According to Right Wing Watch, members of anti-LGBTQ and religious right groups are practically giddy with happiness over Trump's decision to kick transgender soldiers out of the United States Armed Forces.

If you are a glutton for punishment, you can read the link. To me, however, one comment stood out. It was from Matt Barber, a spokesman for the anti-LGBTQ hate group Liberty Counsel and editor of an online crapfest called BarbWire:

Next step? Prohibit all open sexual deviancy in the ranks of the armed services. The military is no place for extremist San Francisco-style socio-political activism. Such social engineering destroys national security, troop morale and unit cohesion. It also violates natural law, settled science, and God's moral law. President Trump did the right thing today by prohibiting those suffering from the gender dysphoria mental disorder. Individuals with other mental disorders and even flat feet cannot serve in the military. It's a privilege not a right.


For those asking, yes Barber means eliminating gays from the military. Barber has a long,ugly history of demonizing the LGBTQ community in some of the worst ways possible, including:

telling other religious right activists that they must talk in all sorts of awful terms about gay sex, claiming that the "ick" factor of it is the "Achilles heel" of the LGBTQ equality movement.

sending out the following disgusting tweet during Obama's 2011 State of the Union address:

and sending out this equally hideous tweet protesting the inclusion of gays in the Boy Scouts: 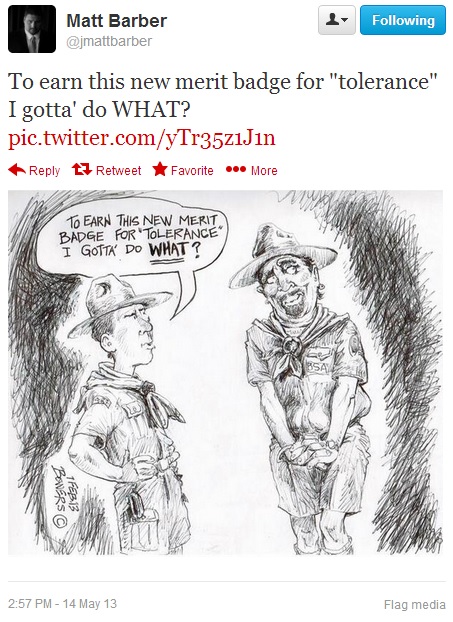 I've learned not to discount the audacity of the anti-LGBTQ right so I say with all seriousness that I have no doubt that some of them are dreaming about eliminating gays from the military.

But even if Barber's desire is only a pipe dream, the fact that Trump empowers homophobes like him remains. That in itself is a danger to the LGBTQ community in every realm of American life.

Posted by BlackTsunami at 3:18 PM No comments:

In a tweet this morning, Trump banned transgender men and women from serving in the military in any capacity in spite of the fact that many are already serving. The religious right is ecstatic, a large majority of us are pissed (as well we should be) and the Department of Defense was caught off guard by it. I don't expect that they are happy. Mattis may go through the roof.

Here is the story as of now via various news articles and tweets:

Trump Administration Official Admits Decision Banning All Transgender Service Members Is Purely Political - Not gonna even try to hide it.

What does transgender mean? - The people whose service Trump just spit on.


How many members of the military are at risk? A huge number:


RAND estimates that over 4,000 transgender Americans currently serve in the military. Trump wants to kick them out. https://t.co/Y7LUeCEh93 pic.twitter.com/DOsLZ8zShH
— Caroline O. (@RVAwonk) July 26, 2017

According to members of the press, the Pentagon wasn't even consulted, which means Trump may have lied in the tweet when he said he consulted with "his generals." And I wonder just what "experts" he spoke with:

Pentagon Policy on Trump Total Ban of All Transgender Service Members: 'Call the White House'- Yep. This decision was made without input.

GOP lawmaker on Trump transgender military ban: No one should be prohibited from serving - It's not just Democrats not happy with this.

Trump’s Transgender Military Ban Another Check On The Religious Right’s Policy Wish List - And they are practically pissing on themselves with happiness.


Various religious right comments from an article I REFUSE to link to:

"It's about time common sense comes to the Pentagon. The president obviously has been consulting with the top leaders in the Pentagon, who are grounded in common sense, and they made recommendations to end it. So the president [has decided to] not go down that path that the Obama administration paved regarding political correctness." - Lt. Col. Robert Maginnis (USA-Ret.) Senior fellow for national security Family Research Council

"[There likely will be legal challenges, but you can examine] Title VII of the 1964 Civil Rights Act, the First Amendment – there are no federal government protections for people based upon their sexual inclinations [toward] the same sex or because they are sexually confused and struggle with a mental disorder wherein they believe they are the opposite sex."  - J. Matt Barber, attorney Founder, Barbwire.com

"Pleased to hear that @realDonaldTrump shares my readiness and cost concerns, & will be changing this costly and damaging policy #readiness." - Republican Rep. Vicky Hartzler (Missouri) (author of defeated amendment to NDAA that would have ended military funding for sex-change operations for active duty service members)

"AFA applauds President Trump for his courageous decision to end the usage of our military for social engineering and political correctness. American families deserve a military that is focused solely on readiness and national defense." - Tim Wildmon, president American Family Association

"The military can now focus its efforts on preparing to fight and win wars rather than being used to advance the Obama social agenda ... The last thing we should be doing is diverting billions of dollars from mission-critical training to something as controversial as gender reassignment surgery. However, the cost to readiness, recruitment, retention, morale and cohesion would have been even greater under the Obama policy." - Tony Perkins, president Family Research Council


Before Trump banned transgender people from serving in military, here's who praised him as pro-LGBTQ - I hate to be "that guy," but those who made this claim deserve all of the crow shoved down their throats.
Posted by BlackTsunami at 9:06 AM No comments: