As I once stated before, one can easily tell that Florida's 'Don't Say Gay' Bill is a rotten idea by seeing just who supports it. Religious right group the Family Research Council  falsely claimed that the bill protects children. Of course the Family Research Council is also the same group whose president, Tony Perkins, once said that gays were the pawns of Satan.
Recently another religious right group, the American Family Association, came out in support of the bill via an article on its 'news' webpage, American Family News:

President Biden and his administration are frazzled by state efforts that directly oppose the left's agenda to keep parents out of the loop while they sexualize young public school students.
Cultural issues writer Laurie Higgins of the Illinois Family Institute (IFI) finds Biden's strong opposition to House Bill 1557, which discourages classroom discussion about sexual orientation and gender identity in the primary grade levels, very revealing. "They're saying, 'We want to use our youngest grades to [have] teachers lead discussions on homosexuality or cross-dressing;' that's in effect what they're saying," Higgins notes. "People need to listen to that and take them seriously."

That is a disgusting lie. But then the article goes even lower via the following passage:

Another important part of the bill would allow parents to have access to their children's student records. "I think that this is aimed directly at the many school districts now who are affirming kids' trans identities and concealing what they're doing from their parents," Higgins submits.

Higgins - and the AFA - are deliberately minimizing an alarming amendment to the bill which would have forced school officials to out LGBTQ kids to their parents, even if the act could lead to the possible abuse or neglect by said parents. The amendment was withdrawn by the bill's sponsor because of the firestorm it caused.
Just like the Family Research Council,  AFA's brand is the demonization of LGBTQ people. And just like FRC,  the American Family Association was declared a hate group by the Southern Poverty Law Center because of this.
Read more »
Posted by BlackTsunami at 8:14 PM No comments: 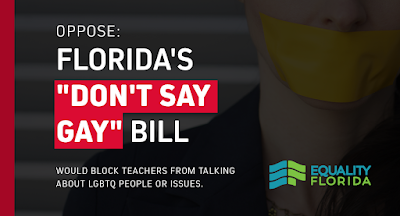 An amendment to Florida's controversial "Don't Say Gay" bill that would have forced teachers to out LGBTQ students to their parents has been dropped. Local news station WFLA reports that Florida State Rep. Joe Harding has withdrawn his amendment, which came under heavy criticism from Florida teachers, students, and parents. "The bill would have forced schools to out their LGBTQ+ students to parents within six weeks of a student disclosing their sexual orientation to school personnel," WFLA reports. "The amendment had set up what it called a protocol to encourage a safe discussion between parents and students, but removed protections for students who would have potentially been subject to abuse, abandonment or neglect by their families."

Raw Story also said that even without the amendment, the bill itself is still moving forward.  And while it still has a good chance of passing, it is also galvanizing Democratic lawmakers and Florida's LGBTQ community.
The USA Today pointed to Harding's now withdrawn amendment as a reason why opposition got supercharged:

Harding's latest amendment acted as virtual gasoline on an online fire, stoking outrage from members of the LGBTQ community, including openly gay Democratic state Rep. Carlos Guillermo Smith. The amendment "make(s) it even more dangerous for vulnerable kids with a STATE-MANDATED outing of LGBTQ students to parents, specifically in cases of abuse, abandonment + neglect. This will have devastating consequences for our youth," he tweeted. Smith also cited research that LGBTQ youth are four times "more likely to seriously consider, make a plan for, or attempt suicide than their peers AND that at least one LGBTQ youth aged 13–24 attempts suicide every 45 seconds in the U.S." "#DontSayGay makes this worse," he added.

Other Democratic lawmakers have also condemned the bill, calling it toxic and personal. And according to The Tallahassee Democrat, it's not just Democrats who have problems with it:

Jon Harris Mauer, public policy director for Equality Florida, said he's heard concerns about the amendment from legislators on both sides of the aisle. "They have withdrawn this amendment but have made clear they are willing to take a disgusting, unfettered attack on LGBTQ youth. In response to public pressure, this particular amendment was withdrawn, but there are many steps left in this process and we have to stay vigilant," Mauer said.