Don't be fooled by this story. I am sure that Maggie Gallagher and Brian Brown are salivating with glee at the thought of exploiting this story to harm marriage equality. But still, it is a victory against unfair "religious exemptions:"


The state of Illinois is within its rights to decline to renew contracts with Catholic Charities for adoption and foster-care services, a judge ruled today.

The state had ended its contracts this summer with four Catholic Charities agencies that refused to consider couples in civil unions, including gay couples, as adoptive or foster parents, but instead wanted to refer them to other agencies. Civil unions became available in Illinois June 1.

The issue arose with the passage of the Illinois Religious Freedom Protection and Civil Union Act, which conferred the same legal rights to same-sex couples in civil unions as married couples and went into effect June 1.

Brejcha said that language in the civil union act allowed the charities to send civil union couples and unmarried people to other foster care agencies. He further argued that the state had ended its 40-year relationship with the charities without warning or reason.

However, attorneys for the state argued that the charities had no right to contracts in the first place, and that it would be illegal for the state to offer contracts that violated civil union law.

"The state has the freedom to set the limits of its contracts," said Deborah Barnes, an attorney with the Office of the Attorney General. "It wasn't arbitrary and capricious, the ending of this 40-year relationship… the legal landscape has changed."

Also arguing against the charities was the American Civil Liberties Union ( ACLU ) , which was granted the right to intervene in the suit on behalf of a lesbian and children who are wards of the state.

Karen Sheley, a lawyer with the ACLU said that a refusal to place children with same-sex civil union partners would harm LGBT children in foster care and discourage LGBT couples from becoming foster parents.

"When they send [ a case ] to another agency, it doesn't solve the problem," she said. "It's still discrimination."


However, Schmidt said that arguments about discrimination from both sides would not impact his decision.

He repeatedly discouraged arguments related to LGBT and religious rights and urged for focus on property rights.

"Do you or do you not have a legally protected property interest?" Schmidt asked.


Brejcha said that licenses from the state which allowed the charities to carry out foster care work were a property interest. Attorneys for the state said that such licenses do not guarantee contracts and that the charities were not being forced to participate now that the law has changed.

Posted by BlackTsunami at 4:51 PM 2 comments:

The National Organization for Marriage is setting up its battle plan to defeat marriage equality in Minnesota and it seems that the plan pushes three points - money, churches, and marytrs.

According to Think Progress:

The fight over a constitutional amendment to ban same-sex marriage in Minnesota could cost up to $10 million before voters go to the ballot in November 2012. And while the measure only seeks to define civil marriage as “a union of one man and one woman,” proponents of the amendment have begun waging a campaign that blurs the line between civil and religious unions.

And of course you know that a good amount of that will probably be provided by NOM. After all, the organization has already spent over $700,000 in the gubernatorial race which the candidate it supported, Tom Emmer, lost.

So win or lose, NOM can expect even more questions at to where exactly is it getting its funding and why does it fight losing court cases to hide its donors. The organization has fought in several states to hide its funders, most recently losing two cases this month.

Think Progress also notes how NOM is attempting to get Minnesota churches behind its efforts:

Even though marriage equality bills have never tried to dictate what any religion can believe or practice when it comes to sanctifying religious marriage, the Minnesota coalition, Minnesota for Marriage, and other so-called “traditional groups” are defining their campaign in religious terms. For instance, the National Organization for Marriage (NOM) is encouraging Facebook fans to “support marriage as God intended it to be,” while Minnesota Family Council (MFC) President John Helmberger has injected God into his rhetoric, predicting success if “people of faith [rise] up, speak, and participate in the campaign.”

The article also says that MFC is actually "recruiting church captains."  My question is wouldn't that present a problem in court should NOM win and someone challenges the victory? But more the point, MFC  is the same group which claimed that gays engage in pedophilia, bestiality, and the consuming of feces and urine - points that it did not apologize for nor did NOM address.  Whether or not they believe these things about the gay community is definitely a question which should be asked to NOM's allies in Minnesota, particularly the prospective "church captains."

And let's not forget about the martyr.

Earlier this month, a freelance writer, Carrie Daklin, with Minnesota Public Radio, wrote a piece which criticized Sen. Al Franken (D-MN) for calling out Focus on the Family's Tom Minnery during a hearing on the Defense of Marriage Act. Daklin contended that Franken had rudely set Minnery up for ridicule by obscuring the fact that Franken had actually called out Minnery for wrongly citing a government study on families.

Daklin was justifiably criticized for her faux pas. Today she claimed in another column that she was unfairly attacked and naturally, NOM has a portion of that column on its blog, using it to claim that those support marriage equality are "meanies." This is what Daklin claims:


There must be a group of advocates who watch that website for anything that might conflict with their point of view. Within days, my words, taken completely out of context, and my message — better manners — had been used as the basis for a rallying cry: Carrie Daklin of Minnesota is a homophobe.

I am not sure how my message got so skewed. I have become the object of hate mail and really vicious comments, all in the name of etiquette. Go figure.

I found this all rather unsettling.

... What has happened in our culture, that so many of us are completely unable to accept someone who doesn't share our views? I don't agree with all that my conservative Christian friends espouse, but I support their right to their beliefs. I don't agree with a very liberal friend who said certain members of the religious right should be shot. Actually, he used the word murdered. Sadly, I think he meant it.

In retrospect, the original infraction I wrote about is positively innocuous compared to the resulting uproar. To be blunt: My article was not about gay rights, it was not about the Defense of Marriage Act, and it most certainly was not a promotion for the National Organization for Marriage.

If some of the comments directed to Daklin were as vicious as she claims, I certainly don't agree with them. However her attempts to claim martyrdom is as sad as the original column itself.

Daklin's words were not misconstrued, but her intent was justifiably questioned. It was obvious that Ms. Daklin was commenting about a situation in which she had absolutely no clue, much like a baseball referee attempting to officiate a hockey game.

While her original column was seemingly innocent, the adage of "looks can be deceiving" were definitely into play. Through her words, Daklin allowed some folks to obscure the fact that they were deceptively manipulating studies to push a vicious and vindictive lie regarding children and same-sex households. While at the same time Daklin pleaded for civility, she was giving ammunition to people who know nothing about the term because there is no such thing as civility in the absence of truth.

Let's be clear about what exactly happened between Franken and Minnery yet again.

Franken did not set up Minnery for ridicule. He rightfully called him out for pushing fraudulent material.


The pushback Daklin received (the respectful pushback that is) for her column was not a matter of people showing intolerance to someone registering a different opinion. It was a simple reaction of a people harmed yet again through lies and distortions, by research manipulated to make them look like monsters.

I wonder how she feels about NOM exploiting her new column?

Bachmann Staffer’s Ties To Uganda’s ‘Kill-Gays’ Bill - Why oh why am I not surprised over this one?

NOM's 'Let the People Vote' effort has hauled in 4.5 million. At least that's what Brian Brown's spinoff site says - You can't get me drunk or high enough to think that this is legitimate.

Dan Savage on Obama - Don't quote me but I'm starting to like Dan Savage more and more. Now don't say anything to screw it up, Dan. LOL

Young black gays and lesbians are encouraged to 'Be Great'

My online buddy Rod 2.0Beta just made me aware of an awesome campaign aimed at young African-American lgbtqs. So I know he doesn't mind if I "bite" off his post a little:

A Chicago organization that works with Black LGBT youth has launched a new social marketing campaign that encourages youth to "Be Great." The youth-led campaign is designed to end violence among Black LGBT youth, such as the vicious July stabbing captured on video.
The July 3 incident was the latest in a series of violent fights involving young Black LGBT in Boystown. The stabbings and the presence of Black/Latino street youth in the mostly white area has sparked a racially-fueled debate. More than 600 people attended a community policing meeting to discuss the problems.


Frank Walker, founder and executive director of Youth Pride Center, says "Be Great" was created as a response to community outrage over the attacks. "[The community meeting] was getting away from the actual topic, which was: How do you deal with violence?" Walker told Windy City Times. "We believe every person should live in a safe neighborhood. We don't believe that it's racist to say that. ... Nobody wanted to hear what the youth had to say, and there's a big difference between what youth are saying and what adults are saying."


The campaign features youth-created posters and video submitted to its Facebook page. Submissions will be judged. The winning print entry will run in the Windy City Times and be distributed among youth as a palm card. 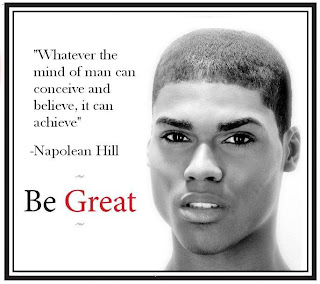