DeSantis spokesperson - If you oppose the 'Don't Say Gay' bill, you're probably a pedophile or have complicity in pedophilia

The Don't Say Gay' bill in Florida has nothing to do with protecting children. It's all about exploiting people's fear and ignorance of LGBTQ people. It's about accommodating homophobia, transphobia and basic bigotry. Most of all, it's about erasing the lives of certain people to fit false preconceived notions about gays and sexual intercourse for the purpose of gaining political power.

And thank you, Christina Pushaw for proving that point. Who is Ms. Pushaw? She is Florida Governor Ron DeSantis's spokesperson and she sent the following tweet on Friday (tweet saved by journalist Judd Legum before she blocked him): 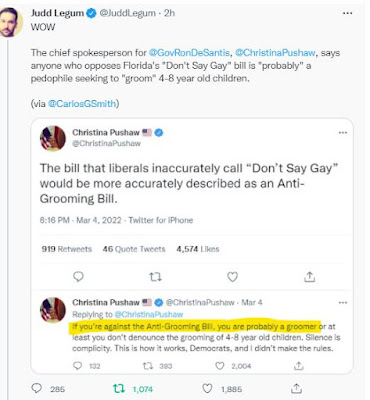 And on Sunday, she makes it worse (because apparently backing down and admitting that you are wrong is not an attribute in politics) 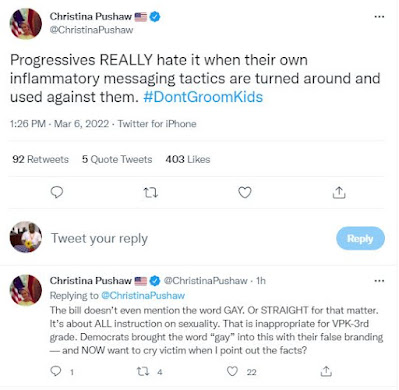 This is the reality. In spite of what the supporters of this bill claim, Pushaw's tweets rings through as fact. The bill specifically targets LGBTQ people while hiding behind the 'protecting children' lie. When people hear the word 'gay,' they automatically think about sexual intercourse and when they hear about transgender people, they automatically think about surgeries. The truth behind being gay, lesbian, bisexual, transgender, etc encompasses more than surgeries or physical carnality.

But the Florida bill isn't about these complexities and facts. It's about whittling down LGBTQ lives to weaponized soundbites. It's about stigmatizing and smearing LGBTQ people for predatory purposes. It's no secret that DeSantis wants to run for president. And Pushaw is doing everything she can to ride his coattails even if it means building a road to the Oval Office paved with the lives damaged by the 'Don't Say Gay' bill.

They simply repeat nonsensical mantras about "'recruiting" or "grooming" and things like "let kids be kids" and "parents know best." The supporters of Florida's 'Don't Say Gay' bill seem to think that repeating these things will drown out the voices of those the bill will hurt.