There is nothing wrong with teaching gay history

According to Equality Matters, Fox News seems to be waging a war of misinformation against a recently passed California bill which will require public schools to teach students about the contributions of gay, lesbian, and transgender Americans.

I personally don't see anything wrong with mentioning the contributions of lgbtqs throughout history, especially in this environment when our gay youth don't have the sense of their own history. Lgbtq history goes way beyond the Stonewall riots. We built up kingdoms, we organized marches, and we saved the world on many occasions through our ingenuity. What's wrong with learning about these things?

But leave it to Fox News to basically lie about this bill:


Since April, Fox has had a field day misinforming viewers about California’s SB 48 -- also known as the FAIR Education Act -- a bill that would require public schools to teach students about the contributions of gay, lesbian, and transgender Americans. The bill is aimed at reducing anti-LGBT bullying and promoting respect for members of the LGBT community. Fox consistently misinformed viewers about the bill, calling it a “shocking lesson plan” that would present students with “propaganda” and force them to learn that people “can have more than one gender or no gender at all.” Brian Kilmeade, co-host of Fox News’ Fox & Friends, spoke volumes about Fox’s view of LGBT people when he wondered “should public school teachers be ordered to tell their students why it’s okay to be gay?

Typical Fox News crap. It's bad enough when folks think that your life consists of only empty sexual encounters, shame, and basic unhappiness. But it's even worse when they try to prevent education which would dispel these false notions.

Here is the real story about the bill, according to MSNBC:

Posted by BlackTsunami at 4:05 PM 2 comments:

The religious right constantly whines that the gay community doesn't show "tolerance" for their views. But I ask you, could you tolerate this madness:

All the views are fit to print? Not in the marriage debate. Not in the MSM. Not yet. - A PERFECT example of why us lgbtq bloggers need to step up when the mainstream media won't do their job.

Gay marriage, bishops and the crisis of leadership - FINALLY! An article which takes the Catholic Church leadership to task over their fight to harm marriage equality.

Posted by BlackTsunami at 9:09 AM 5 comments:

Two anti-gay hate groups claimed victory recently with the elimination of the Education Department's The Office of Safe and Drug-Free Schools. That office was led by Obama appointee Kevin Jennings.

Those on the right waged a huge, unsuccessful war to get Jennings removed over a year and a half ago by smearing him as a pedophilia-enabling, Christian-hating, monster who likes to teach children about bizarre sexual practices.  None of these charges stuck, however and Jennings stayed employed until finally resigning early this year to become president and CEO of  Be the Change, a nonprofit organization.

Because he left on his own, no one on the right could take credit for Jennings's resignation. However, it would seem that they are trying to salvage a victory out of the embarrassment they endured over Jennings by claiming victory because the Office of Safe and Drug-Free Schools is being eliminated.

From the Family Research Council (with a cute, but highly immature graphic): 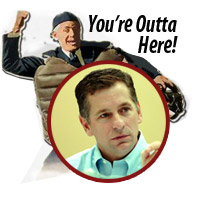 It took 18 months of protest, but FRC can finally celebrate a major victory at the Office of Safe and Drug-free Schools. The agency, which (until two weeks ago), was headed by radical homosexual activist Kevin Jennings, has been eliminated. In a statement, the Deputy Secretary for Education announced that Congress had cut the Office's funding by almost $80 million, and it could no longer operate at the level which the Department had grown accustomed. Starting this summer, its duties will be absorbed by another program--knocking the Office's LGBT indoctrination campaign down several rungs on the Department's ladder. For more than a year, FRC had fought the administration on Jennings's appointment, which seemed to be a front for advancing the homosexual agenda in American classrooms. With the help of 53 Congressmen, FRC battled for Jennings's removal, even launching a special website to inform parents about his real motives. Now, a year and a half after his appointment, the Office of Safe and Drug-free Schools is finally where it belongs: on the cutting room floor.

And from Mass Resistance, the group behind many of the smears lodged against Jennings:


Although it's difficult to pinpoint the exact amounts, it's estimated nearly three-quarters of the funding to [Kevin] Jennings' "Office of Safe and Drug Free Schools" is being cut by Congress in the upcoming 2012 budget!
...
This follows nearly over eighteen months of pressure from Mass Resistance and media outrage (using our research and reports) about Jennings' horrible history as a homosexual activist and his use of his Federal office to push the homosexual agenda in schools across the country, and our demand that his office be de-funded.

In actuality, neither group had anything to do with the elimination of the "Safe Schools" office. It would seem that the office became the victim of budget cuts - the thing that everyone seems to be talking about in Washington these days.

So in short, neither FRC nor Mass Resistance had anything to do with Jennings's leaving his office or the elimination of the "Safe Schools" office.

Posted by BlackTsunami at 5:03 AM 2 comments: