Meet the ' 10 Coolest Queers in Science'

A good part of this blog spreading knowledge about lgbt history. With that in mind, I bet you don't know this guy: 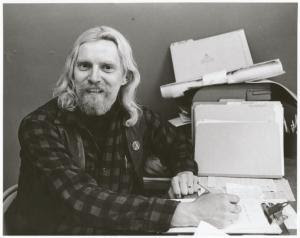 His name is Bruce Voller and according to Unicorn Booty:

Not only was Bruce a pioneering biologist in the field of HIV/AIDS medicine — he gave AIDS its name — he was also a founding member of the National Gay Task Force. In the laboratory, he helped identify new ways to prevent the spread of viruses during sex; he also persuaded President Jimmy Carter to become the first sitting president to meet with an LGBT civil rights group.


Voller is just one of the 10 Coolest Queers in Science. Check out Unicorn Booty for the biographies of those you already knew and probably didn't know.
Posted by BlackTsunami at 3:14 PM No comments:

Oklahoma’s 27 Anti-LGBT Bills Are All Dead - 27 anti-gay bills and all of them died this session. Which means of course they may be back, but let's do a very small, quick yippee!


This Iconic Gay Activist Says Gay Men Should Take Responsibility For Their Sexual Behaviour - Buzzfeed conducts a wonderful with legendary lgbt activist Larry Kramer. My opinion has changed thoroughly over the years.

Missouri Governor Condemns Pro-Discrimination Constitutional Amendment - The push for anti-gay "religious liberty" laws and such faces another bit of resistance.

WATCH: LGBT Students, Allies Clash With Anti-Gay Protesters Outside Tennessee School Board Meeting - But the fight for equality is always on.
Posted by BlackTsunami at 9:06 AM No comments:

Video - ACT UP and the AIDS Crisis

With Nancy Reagan's death and the controversy brought about via inaccurate comments about her "starting the conversation about AIDS" and the correction of those comments, a lot of bad memories were brought up about the AIDS crisis in the 80s.

Let's not forget how members of the community took on the crisis head on, even though a lot of folks misunderstood and attacked them for their methods. ACT UP (AIDS Coalition to Unleash Power) was a wonderful group whose loud and controversial protests brought attention to the crisis and the need to do something about it.

The following video is a 1990 episode of the Donahue talk show featuring ACT UP members Mark Harrington, Peter Staley, Ann Northrop, Robert Garcia and the legendary Larry Kramer. I am totally in awe of these folks:

Posted by BlackTsunami at 4:58 AM No comments: