It's official. Major anti-gay groups and personalities have gone positively ape-#%! crazy over Michael Sam smooching his boyfriend and learning that he was picked by the St. Louis Rams.

But who gets the award for the most outrageous show of outrage? Well the first runner-up has to be Bryan Fischer of the American Family Association, who tried to distort a study (a 1997 Canadian study) in order to condemn the kiss. He didn't get away with it. 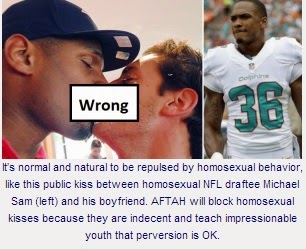 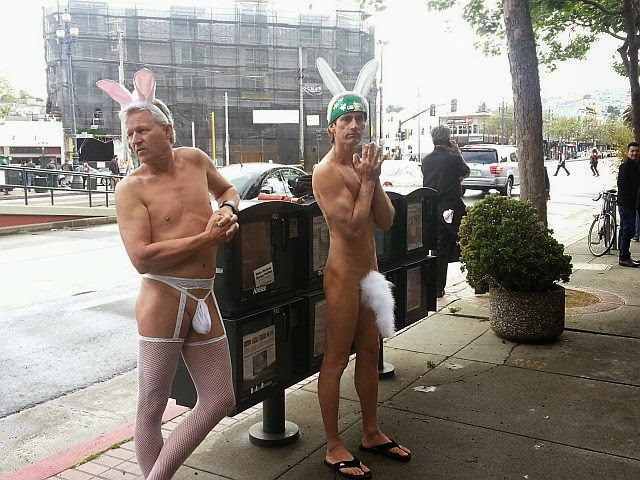 Read more »
Posted by BlackTsunami at 3:04 PM No comments:


Anti-Gay Activists Were 'Grossed Out' By Michael Sam's 'Cringe-Inducing' Kiss - Some people didn't like Michael Sam kissing his boyfriend on television. Now the ghetto sista in me would say something like, "Jealous bitches always be hatin'"  However the sensible person in me says "It's just a kiss, folks. I mean geez! And I can think of worse people to kiss than Michael Sam or his boyfriend. Such as Donald Trump, Todd Starnes, Rush Limbaugh, Peter LaBarbera, that guy in my church yesterday who had dragon with nine-heads breath."


Fox Responds To NFL Disciplining Player For Anti-Gay Tweets About Michael Sam: Could It "Offend ... Free Speech?" - A Miami Dolphins football player is disciplined for an anti-gay tweet about Michael Sam and Fox News personalities and Donald Trump is ever so pissed about it.

Jason Benham: Christians Have A Duty To "Destroy" Ideas God Doesn't Like, Including Marriage Equality - People have asked after the debacle last week with the Benham Brothers, why are they still getting air time to talk about how much they "love" gays? How else can homophobes continue to hang themselves if we stop handing them the rope?

Hubris hath no ego like an anti-LGBT movement that spins - In a strange show of stupidity, the American Family Association has chosen to list all of the Mississippi businesses who won't follow that stupid law which allows them to discriminate against lgbts. In this organization's universe, a business declaring that it will serve everyone is a violation of "religious freedom."

As Arkansas Republicans Freak Out About Marriage Equality, Senate Candidates Remain Mum - And, lest I forget, Arkansas got the gift of marriage equality last weekend. I guess those "queerbots" I used to replace the judges there and the other places where marriage equality laws were struck down are really working (Sorry. I watched that episode of the Bionic Woman, "Fembots in Las Vegas" yesterday and it continues to linger with me.)

Posted by BlackTsunami at 9:13 AM 2 comments:

It's what everyone has been talking about all weekend. Michael Sam became the first openly gay player to be drafted by an NFL team when he was picked by the St. Louis Rams. The following video of him receiving the news must have been seen countless times:

Thus far, the major anti-gay groups and personalities have been showing a surprisingly degree of good taste by not saying a word about Sam's success. Notice I said "thus far."

However, leave it to the rabid wolves, orcs, and bloodsuckers at the extreme right webpage Free Republic to fill in the blanks:

Michael Sam is a Ram(rod). Some jokes write themselves.

The hive media brainwashing Americans to accept this as the new normal.

Yep, nothing more than promoting an agenda and ramming it down peoples throats (no pun intended). This was deliberate in your face attempt to mainstream deviant behavior.

Coming soon to FR and every other blog.If you openly criticize or express disgust with that disgusting scene, the new thought crime police will be sent to your house via your ip address and FR won't have a thing to do with it. All blogs are viewed and combed by the politically correct police for certain trigger words, and soon {if not right now} fag and queer will be high alert words. Gay rights trump Christian rights, period. "If you like your religion, you can keep your religion", said obama.


I think y'all get the picture. There is no need to get upset or wring your hands.There are times when you must combat hate to keep it from spreading. And then there are other times in which you don't have to do anything but watch it spread only over the people doling it out. And feel simple pity for them being in that state.

Posted by BlackTsunami at 5:06 AM 2 comments: