I apologize in advance for below, which is probably the biggest bunch of bullshit you will ever hear in a long time:

Newsmax guest: "We see the LGBT community pretend and act like they're these big victims when the country's never done anything to LGBTQ people" pic.twitter.com/3RszFacZZA

Yes we all know that this is a bunch of nonsense which not only history but EACH AND EVERY LGBTQ PERSON IN AMERICA can refute, But let's focus on who this nut is.
His name is Christian Walker and he considers himself an online conservative 'influencer.' He is the son of GOP Senate nominee from Georgia and former football star Herschel Walker (who is a hot mess himself, but that's another subject.)
One more thing about Christian. He's gay. Or rather, thinks of himself as attracted to men, but not gay: 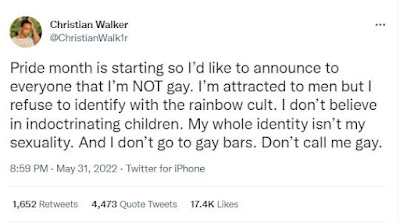 His twitter address is full of nonsense like this. As you can tell, he's auditioning to be the love child of black conservative  Candace Owens and gay conservative Milo Yiannopolos. When Walker's not attacking the idea of Pride, he says things like pro-choice women need not worry about abortion bans because they are too ugly to have sex.
And that's not all. Walker busies himself   attacking Joe Biden, kissing up to Donald Trump, and not only embracing far right conservative orthodoxy, but practically slobbering up to it in a passionate embrace not unlike what he wants to do to other men (but that doesn't mean he's gay wink . . . wink).
Attacking other black people is also something he does: 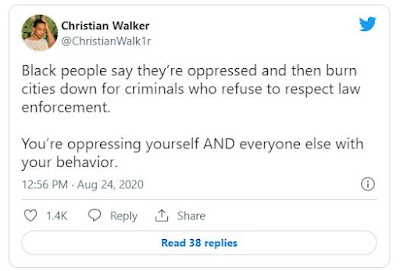 Let's dispense with the nonsense we are bound to hear about Walker.  He is not being attacked for expressing a 'different opinion.' He is not a free thinker or an independent thinker.
Little Walker is a joke and a clown but a dangerous one in today's climate. Ignoring him is only one step. Countering his narrative is a much more important step. There are too many folks willing to amplify him while deliberately stifling the voices of more credible LGBTQ people. They consciously elevate his bullshit even though they know it's a lie because he helps them in their attempt to erase LGBTQ lives, our history, our families, and even our kids.
Walker is useful to them because he is the of personification of what they truly think LGBTQ people are -  moronic mockeries of supposed 'actual people,' vapid, pitiful, self-hating, shallow sprites who are incapable of morality and undeserving of love. They nod at every one of his ridiculous statements of non-solidarity with LGBTQ people while probably laughing behind his back and making fun of his deluded notions of not being gay.
I would venture to say that more of them are saying "that silly bitch" under their breaths than we are.
He is the future that the enemies of equality and the anti-LGBTQ industry wants for us. So while we may laugh at him, we shouldn't allow ourselves to get completely distracted by him. Use him as a challenge to live our lives prouder and tell our stories louder and nonstop.
During LGBTQ Pride Month, we always talk about the kind of  people we want to become. It's equally important for us to take a look at the type of people we do not want to become.
Little Christian Walker is Exhibit A.
Posted by BlackTsunami at 5:22 PM 1 comment: 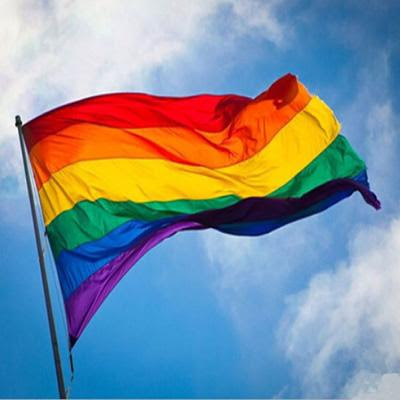 A school banned the rainbow flag from being flown. Students & teachers had the best response.- That's called using your head, folks.
Lauren Boebert kicks off Pride month by picking a fight with Randy Rainbow, fails spectacularly - She tried and failed
Police guard school from right-wing violence over teacher’s LGBTQ-inclusive flashcards​ - And here we go again.
2 Utah families sue over ban on transgender women and girls competing in school sports - They are suing against the ban and I hope they win.
‘King Richard’ star Aunjanue Ellis on her unapologetic Black and bisexual pride - Great article.
Posted by BlackTsunami at 8:39 AM No comments: