With the anti-LGBTQ right, it's all about "priorities."  Isn't it simply wonderful how these religious right groups and activists took time out of their "busy schedules" of condemning the LGBTQ community to stand up for a Congressman who reportedly can't understand why white supremacy is such a bad word.

From Americans  United for the Separation of Church and State's Rob Boston:

The so-called “pro-family” Religious Right – a movement that claims to be all about promoting morals and decency – is all too happy these days to endorse any politician who agrees with them on certain issues – no matter how alarming that person’s statements and views may be.

For more evidence of that, consider that hundreds of allegedly “moral” organizations and individuals just signed a letter to Republican leaders in the U.S. House of Representatives demanding that U.S. Rep. Steve King (R-Iowa) be given his committee assignments back.

King lost the assignments because he has a long track record of saying incendiary, racist
things and snuggling up to extreme organizations that preach hate. Although GOP leaders tolerated his antics for years, King finally went too far last month when, during an interview with The New York Times, he questioned why the term “white nationalist” is considered offensive.

“White nationalist, white supremacist, Western civilization – how did that language become offensive?” King mused. “Why did I sit in classes teaching me about the merits of our history and our civilization?”

King later claimed to have been misquoted. It’s almost certainly a lie, but even if it were the case, it hardly matters – there are plenty of other damning statements by King. He has been spouting racist rhetoric for a long time and last year went so far as to endorse a candidate for mayor of Toronto who had granted an interview to a podcast run by the Daily Stormer, a neo-Nazi website. King once retweeted a neo-Nazi and has been accused of anti-Semitism. He has also met with fascist politicians abroad and has repeatedly endorsed The Camp of the Saints, a paranoid, openly racist 1973 novel that portrays a future Europe overrun by hordes of non-whites.

. . .  So why is the Religious Right defending this guy? Well, King also has a long
history of promoting that movement’s pet ideas. In 2002, while a member of the Iowa legislature, King introduced a bill requiring that public schools teach that the United States derives its strength from “Christianity, free enterprise capitalism and Western civilization.” In 2005, King, now a member of Congress, cosponsored legislation that would have stripped the federal courts of their ability to hear any legal case that would challenge any government’s decision to acknowledge “God as the sovereign source of law, liberty, or government.” He has been a reliable vote for the Religious Right ever since.


So who signed this letter? According to ThinkProgress (click on the link to find out more details about the folks below), a number of prominent anti-LGBTQ activists: 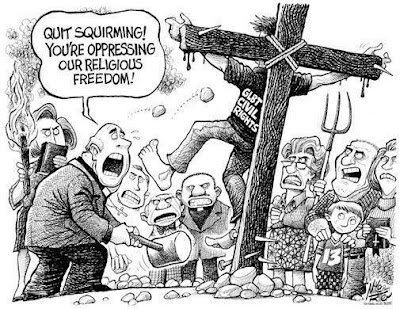 AZ Atheists Aren’t Censoring Christians by Publicizing a License Plate Program - Dig this. Simply publicizing the fact that a hate group working to undermine LGBTQ rights, put gays in jail for simply being gay, and sterilizing transgender people is making money via an Arizona license plate program is "anti-Christian" bigotry.

Ellen Page Reminds The World That Trans And Queer Rights Are Not Up For Debate - PREACH!!

GOP Lawmaker Under Fire for Saying He’d Drown His Kids if They Were Gay Now Says He Just Did It to Own the Libs - "I meant to do that." The Pee Wee Herman argument of homophobia.