We are all getting a kick out of the tribulations of phony journalist James O'Keefe, but let's not be so quick to make fun that we forget a few things.

O'Keefe was receiving salary from Andrew Breitbart, the founder of the site Big Government. That's the weirdo on the video above being interviewed (the video is painful. Someone needs to talk about punditry in Washington)

You do remember Big Government, do you? That's the site behind the huge crop of lies against Obama appointee Kevin Jennings. From Media Matters comes a listing:

Blogger Hoft's smear campaign against Jennings. Writing for the website Gateway Pundit, Jim Hoft has authored a series of factually dubious attacks on Department of Education staffer Kevin Jennings and the organization Jennings founded and previously led, the Gay, Lesbian, and Straight Education Network (GLSEN). Hoft's Jennings posts -- which he has labeled "Fistgate," even though many of those allegations have little or nothing to do with the sexual practice of fisting -- often draw upon the work of MassResistance, a Massachusetts based anti-gay organization that has been labeled a "hate group" by the Southern Poverty Law Center. Even conservative commentator Dean Barnett has stated that the organization "verges on being a hate group."

Breitbart eagerly embraced and promoted Hoft's false attacks on Jennings. Hoft's "Fistgate" attacks on Jennings and the GLSEN have been faithfully cross-posted on BigGovernment.com, and Breitbart himself has used Twitter to promote Hoft's work. Among the smears and distortions Breitbart has embraced:
Breitbart.tv also smeared Jennings. An October 6, 2009, Breitbart.tv post grossly distorted comments Jennings made to a GLSEN audience in 2000 to claim he "criticize[d] schools for promoting heterosexuality." In fact, in the audio files posted at Breitbart.tv, Jennings promoted a curriculum that demands "respect [for] every human being regardless of sexual orientation, regardless of gender identity, regardless of race or religion or any of the arbitrary distinctions we make among people," and said that efforts to promote a specific sexual orientation through schools were ineffective.


O'Keefe went after ACORN and caused the organization considerable trouble. Just imagine what he could have tried with various national and statewide lgbt organizations.

It's a part of a huge picture of targeting us all via slander and innuendo. O'Keefe got over his head and got so stupid that he got caught.

I'm sure there are others waiting in the wings.

Just something to remember.

Posted by BlackTsunami at 3:56 PM No comments: 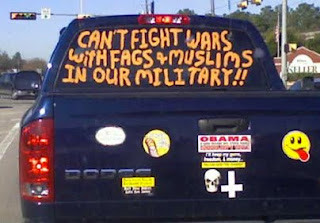 Oh yeah. Opposition to LGBT equality is ALL ABOUT THE LOVE!

Hat tip to Goodasyou.org and the New Civil Rights Movement for the picture

Because you never know what 'right' he will seek next - These phony experts seem to be "testifying" everywhere.

'Don't say gay' bills deferred to senate committee - These bills are archaic. How did we miss talking about them?

Posted by BlackTsunami at 9:01 AM 2 comments:

Family Research Council rails about 'sexualization' of the Armed Forces

While I know that everyone wants to zero in on Obama for his comments regarding Don't Ask, Don't Tell, check out this from an email message by the Family Research Council:

Last night in his State of the Union Address, President Obama repeated his call for Congress to repeal the military eligibility law that was passed in 1993, and to allow homosexual conduct within the ranks of the armed forces.

This would put our military in the strange position of actively recruiting personnel who have an expressed intention to violate the Uniform Code of Military Justice (which still prohibits certain forms of sexual conduct, including homosexuality). Forcing soldiers to cohabit with people who view them as sexual objects would inevitably lead to increased sexual tension, sexual harassment, and even sexual assault. America's military exists to fight and win wars --not to engage in radical social engineering.


It's amazing how the lies never really change. During the original hearings in the Clinton Presidency, Army and Navy officials circulated the discredited studies of Paul Cameron. Senator Sam Nunn, who opposed gays in the military, took the press on a tour of  shower facilities in an attempt, I guess, to emphasize how "normal soldiers"  are in danger if lgbt soldiers are allowed to serve openly.

That's the opposition, folks. And if we either laugh or marvel at the ignorance of FRC's statement, we do it at our own peril. We should remember that the organization belongs to a conglomerate of groups, talking heads, and assorted blogs all pushing the same lie - that somehow allowing gays to serve openly in the military will lead to danger.

So while Obama is relevant to a degree, in a larger sense he is rendered irrelevant if FRC and other organizations (not to mention Fox News, Big Government, etc.) can stitch together a  good fear story to make Americans doubt the necessity of eliminating DADT.

And you just know that they are going to try. The question is what are we going to do about it?