In its continuing war against Macy's Department store for firing an employee who harassed a transgender customer - which was in violation of company policy - the right-wing Liberty Counsel has chosen to stoop low.


We also have another individual that contacted us, Matt, who said that he was sort of a trouble shooter, I forgot the exact title that he was working in in Macy’s, and he brought to Macy’s the issue of these men going into the women’s fitting rooms. . . . Loss prevention or something of that nature. He brought to their attention articles from around the country where people had gone into Macy’s, and some other stores but specifically Macy’s, women had gone in and they had been sexually assaulted in these fitting rooms by men that have been coming into those fitting rooms, and even rapes. He brought this to the attention of Macy’s to address this policy and he said rather than address it he was terminated.

How convenient that this tipster is anonymous, just like the last tipster Staver referred to last year who claimed to be an employee of Macy's allegedly fighting to keep "men out of the women's dressing rooms.

I said it back then and I will say it again. I smell a rat. Or more specifically, until Staver produces this anonymous tipster, I think he is lying.

And this time, it's serious.

Staver is accusing Macy's of covering up the heinous crime of rape. This isn't something that needs to be merely talked about on a radio show. It needs to be investigated. And if Staver is lying, he and the Liberty Council need to face the full consequences.

LGBTQ youth caught in the crossfire of phony 'religious liberty'

Macy's stands up for the lgbtq community

Posted by BlackTsunami at 3:39 PM 7 comments:

Romney Campaign Disavows 2002 Gay Pride Flyers - Somebody is REALLLLY desperate to be president. The flyer in question: 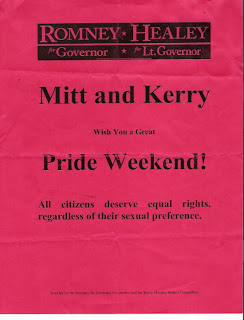 Same-Sex Marriage Follows Rick Santorum Around New Hampshire - He gets what he deserves.

Gathering of Eagles Prays for Ex-Gays to 'Blitz' the Media and Defeat the 'Homosexual Agenda' - Okay I haven't included a wildly homophobic brief in a while.

Just a reminder from Think Progress detailing - via the recent New Hampshire debate - what the Republican candidates think of our families. Please remember this on election day: