In the Benham family, the rotted apples don't fall far from the homophobic tree

I think a lot of us in the LGBTQ community know David and Jason Benham, the Glimmer Twins of Homophobia whose severe anti-LGBTQ speech cost them a reality show on HGTV in 2014 but gave them new careers as professional victims of the supposed radical gay agenda.

They are so well-spoken, hunky, and photogenic that's almost so darn easy to pay no attention to the mind boggling extremity of their homophobic speech.

But then you would have to remember who their father is. I personally think that an asset the Benham brothers has is that there is little to no attention focused on their father, Flip Benham. Benham, a minister and head of the group Operation Save America, is infamous for his stances against the LGBTQ community. I really wish there was more attention paid to Benham because he gives a good example of what his sons really are.

Strip away the cute faces, the muscular bodies, and the supposed Christian veneer and you'll have what you see below in these videos of Flip Benham screeching about the LGBTQ community - a paranoid fanatic:

Posted by BlackTsunami at 5:22 PM No comments: 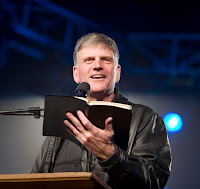 Alveda King &  Franklin Graham Provide Cover For Trump At Unsettling Phoenix Rally - Apparently Trump's insane rally last night featured two supposed religious figures who came on and prayed before he proceeded to do his head-spinning, pea-soup spitting act. Martin Luther King Jr's homophobic fake-assed civil rights activist niece (which means she goes anywhere to get attention spotlighting her phony status) Alveda King.  And Franklin Graham, who said nothing when the GOP nearly stole healthcare from millions of Americans via its attempt to repeal Obamacare probably because he was too busy still being angry that the 'Beauty and the Beast' motion picture featured a gay character. Naturally, Graham made a subtle homophobic dig during his prayer.

The president can’t stop hiring people who oppose LGBTQ rights - And the latest one is . . .

Let’s Not Forget The People Of Color Who Helped Pioneer Marriage Equality - Pssst! AND the bloggers. But our story will be told later. Let's concentrate on these folks so that they aren't forgotten.

7 LGBT Americans Who Deserve Monuments More Than Confederate Leaders - I FULLY support this!
Posted by BlackTsunami at 9:39 AM No comments: