Outing is the controversial practice of revealing someone's sexual orientation without their permission. It's usually done to celebrities and politicians. It's controversial because some feel that it is an invasion of privacy while others feel that it is necessary to bring more visibility to the problems of lgbts forced in the closet or combat the hypocrisy of secretly gay lawmakers who publicly and actively campaign against lgbt equality. After watching these videos, tell me what you think:

Love this! Had to post it! The photo is from an anti-gay marriage equality rally yesterday in Minnesota 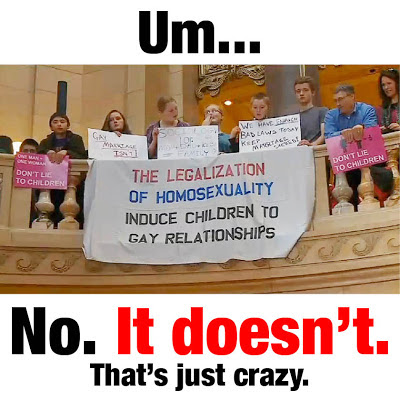 In other news briefs:

Ernie Banks, other Chicago sports legends back marriage equality - Not bad. Not bad at all.

Insurance Agency Reverses, Agrees To Cover Transgender Student’s Treatment - Kudos and special thanks to the young man's fraternity who at the time was raising money to cover his part of his gender transition surgery when he was initially denied by the insurance company. Say what you will, this story destroys almost every negative stereotypes out there about fraternities.

Tebow at Liberty University; Fox says facts are 'bullies' - Awwww! Fox News gets angry at lgbts when we bring facts out about anti-gay organizations and universities. I guess they miss the scared lgbts.

FRC’s Tony Perkins Lies His Ass Off About ENDA In Fundraising Appeal - A point-by-point take down of anti-ENDA lies. Although between u and me, the words "Tony Perkins" and "ass" in the same sentence makes me nauseous.

Family Research Council clearly lying about scientific evidence and gay parenting - Speaking of Perkins' group, the Family Research Council, I am including a post I wrote last night because it's just unbelievable to me that these folks thought they could lie about the scientific evidence of gay parenting and not get called out about it. I mean just BRAZEN!

Those who complain about how the lgbt community is unfairly comparing itself to the African-American community in terms of the struggle for equality are probably not going to be happy to hear this news, so I want to tell it as soon as possible.

Lawyers for the university made the connection in a recently submitted brief to the Supreme Court for the upcoming Prop 8 trial. According to Think Progress:


Think Progress continues with an excellent summation of the Howard University brief.

No doubt the National Organization for Marriage and others who want to exploit the alleged black vs. gay divide will most likely ignore this briefs and the facts put out in it.