The Conservatives’ Guide To Justifying Discrimination Against LGBT People - Like a horror movie fungus, Ryan T. Anderson is back. Fresh from his marriage equality defeat, Anderson is now talking about justifying anti-lgbt discrimination.


When Condoms Aren't Enough - From the article - "Critics of the HIV-prevention pill say it's not as good as safe sex. That's a false comparison, and a dangerous one."

8 Common Misconceptions About HIV And AIDS - Still needs to be known.
Posted by BlackTsunami at 9:12 AM 1 comment:

Trigger warning be damned - Let us all see the vile face of transphobia, homophobia

In yesterday's newbriefs, I made a serious error.

I linked to a story about a homophobic, transphobic Jacksonville preacher who claimed that he was going to be using the bathroom while dressed in drag.

He said that this was his idea of protesting a human rights ordinance. Well being the talker that he is, the preacher didn't follow through with his claim. However, he was passing out a flyer which I found so disgusting that I refused to post it.

That was a mistake. As nauseating as it is, sometimes it is the duty of us lgbt bloggers to shine a light on the hatred that the media and "upstanding bougiee" lgbt activists won't.  What you are about to see is filthy, vile, disgusting. Ignoring it won't make it go away, sidestepping it won't make it go away. And laughing at it doesn't diminish the power of fear is invokes in those ignorant of the transgender community.

To some of you it may be amusing, but don't be so quick to laugh.

This is the work of those who would stoop to lies and distortions in order to strip the lgbt community, and particularly our transgender brothers and sisters, of their humanity and reduce us into boogeymen out to corrupt children.

And remember that there really is no difference between this flyer and the junk put out by "mainstream" anti-gay groups such as the Family Research Council, except for subtlety. They may not spotlight flyers as extreme as the one below, but language veers toward that direction.

In the end, it's all a means to the same sick end: 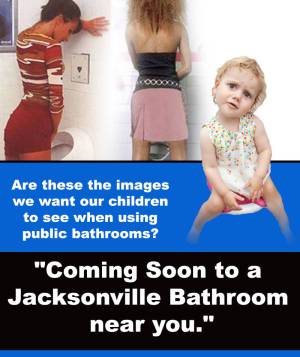 Posted by BlackTsunami at 6:02 AM 5 comments: