Washington state just proved that transphobia has its limits.

Just Want Privacy, the anti-trans group that wanted to make the state vote on trans people's civil rights, did not get enough signatures to qualify for the November ballot. David Ammons, communications director for the Secretary of State, confirmed that Just Want Privacy has canceled their scheduled 9 a.m. signature delivery appointment tomorrow. Trans rights activists won in Washington State. They did it. Fear and hatred won't win, not this time.

According to the secretary of state’s office, Campaign Chief Joseph Backholm informed the office that the campaign did not gather enough signatures.There is a 246,000 minimum for signatures — the state recommends getting 325,000 to account for duplicate and invalid signatures. I-1515 failed to get the minimum. At around noon Thursday, the Just Want Privacy Campaign posted a call for help to gather more signatures, and did not yet mention its failure to gather enough.


In March, ThinkProgress labeled the initiative "The Most Radical Anti-Trans Ballot Initiative Ever Submitted In Washington State."  It would have:

Just Want Privacy was allegedly helped by national anti-lgbt groups  such as the Family Research Council and yet still failed to get enough signatures.

Peter LaBarbera: Gay Rights Movement Is 'A Liberal Cult' And 'Anti-God' - Noted and nauseating homophobes Matt Barber and Peter LaBarbera get together to talk about lgbts and the African-American community and it is probably the single most ill-conceived and patronizing incident this year. Example as follows:

“The blacks are a noble people, certainly, and there are many … Bible-believing Christians who are offended and disgusted by these illegitimate comparisons between mutable, changeable, deviant behaviors, homosexual behavior, and immutable, neutral characteristics such as skin color,” Barber said. He claimed that “black leaders have completely sold out to the radical LGBT lobby and are complicit in making these illegitimate comparisons.”


Texas, 12 Other States Push To Block Feds From Enforcing Trans Bathroom Guidance - By all means please waste that taxpayer money.

This 16-Year-Old Came Out To Her Family At Disneyland And It’s The Best - Other than a Broadway musical, isn't Disneyland THE place to come out . . . shut up.

Gay Collective: “The Virus Divides. It Doesn’t Have To.” - Wonderful post by my friend Mark S. King
Posted by BlackTsunami at 9:07 AM No comments:

Don't be sarcastic and remember that this revelation is a good thing:

Lesbian, gay, bisexual and transgender (LGBT) Americans know in their bones there is a “vast right-wing conspiracy” out to deny them their humanity and dignity. A conservative cabal actively working the levers of power to block their rights. Well, now we have the evidence that one actually exists. Freedom for All Americans (FFAA) is a “bipartisan campaign seeking nondiscrimination protections for LGBT people nationwide” that was created last year in the wake of the Supreme Court decision that legalized same-sex marriage. FFAA executive director Matt McTighe told me that the immediate backlash against that historic decision, such as Indiana’s so-called religious freedom law, was expected. But he said that it was the emerging coordination of the resistance that pushed his organization to sift through public filings to unearth the ties that bind anti-LGBT efforts around the country.

. . . The chart below from FFAA shows the organizations doing the coordinating and the people leading or bankrolling those efforts. If you click on this link it will take you to an interactive site that will give you even more information. 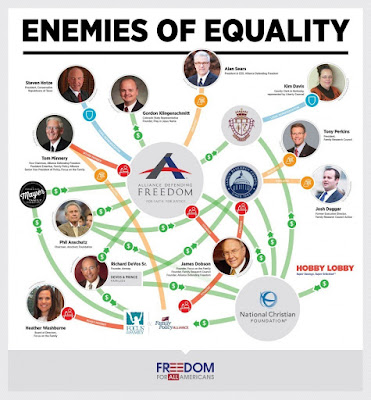