Because of the controversy involving Obama's inauguration and the pastor (Louie Giglio) whose invitation was rescinded because of his anti-gay feelings, the religious right has a new victimhood spin. According to the Family Research Council's Tony Perkins:

What a difference four years makes! In 2009, when the Left was in an uproar about Pastor Rick Warren's prayer, the President was quick to come to his defense. "We have to disagree without being disagreeable and then focus on those things we hold in common as Americans." Now, having revealed his true position on same-sex "marriage," the President seems determined to create even more division. If anything, this pulls back the curtain on the Left's real agenda. And it's not about tolerance. It's about forced acceptance. Americans need to wake up and realize that the homosexual movement cannot be appeased--not by marriage, not by special benefits, not by anything but the sanitization of Christianity from the public square.

But believe it or not, Bryan Fischer of the American Family Association wins the award for the best hysterical spin:

Maybe I slept a bit during history class, but I don't recall Rosa Parks having her own radio show and a national audience where she whined about being victimized.

You see the spin here, don't you? If you don't, you will because I am guessing we will hear more about it. It goes like this:

Thanks to Obama, Christians are being discriminated against. They no longer are able to speak freely in the public square without some form of persecution.

Nonsense. Giglio got into trouble because of an anti-gay sermon.  That's what Perkins and Fischer are missing. This has nothing to do with their religion, but their hate. When they use the phrase "public square," they seem to forget that the "public square" doesn't encompass them solely. Gays are a part of the public square and gays have every right to voice our opinion if we feel we are being disrespected. Although I did disagree with how some of us conducted ourselves (i.e. directing all sorts of unfair animus to Obama before we knew all of the facts), the fact of the matter is that tolerance for someone else's opinion is not the equivalent of being a doormat. We shouldn't sit with cracked smiles on our faces while  credibility and honor is given to someone who attacks us because he sees us as commodities in his ridiculous game of "Who gets to go to Heaven" instead of human beings.

And if you want respect in the public square, you need to show respect. To wit, don't use your interpretation of your religion as an excuse to keep people who you attack and insult from giving you hell.

In other words, Giglio is not a victim and this situation has NOTHING to do with the so-called persecution of Christians. Lastly (yes this is a cheap plug), if you want an idea of just what type of Christianity Perkins and Fischer endorses, check out the booklet on the right - How They See Us.

My suggestion to both Perkins and Fischer is before whining about persecution, they need to work on how they conduct themselves as Christians because in that regard, they are both extremely lacking.

Posted by BlackTsunami at 4:20 PM 3 comments:

BREAKING: Anti-Gay Pastor Removed From Inaugural Program - A little commentary guaranteed to piss some people off. When this situation broke, I rolled my eyes because I knew what would happen before we knew the full story. Some gays went off half-cocked raising hell and calling Obama every name in the book. They also brought up the Rick Warren situation from the last inauguration. I said wait until we hear the entire story, but no. Some of us got into our "super activist" mode. That's when we yell and scream, even at those on our side who plead for rational thoughts. I'm not criticizing the anger, but the method and the lack of thought. I found it hard to believe that a president who had made so many pro-gay strides would make such a 180 degree turn and bring someone like this to his inauguration. As it was, Obama was not responsible. It was a bad decision by the inaugural committee which has now been rescinded. The point is not the fact that we didn't a right to be angry and demand answers. The point is some of us were so damn eager to start talking shit about Obama. And some of the same shit talkers were the same ones who literally declared him the best thing since sliced bread after lgbt-inclusive hate crimes legislation was passed, DADT was rescinded, and he went on record for marriage equality. Make up your minds, folks. When things like this happen, don't be so quick to shit on someone you lauded just a few months ago because mistakes are always made and always need to be corrected. The most important thing in a working relationship is trust. And while I am glad with the speed this was taken care of, some of my lgbt brothers and sisters demonstrated their lack of trust issues. But enough about that. I'm sure I will hear from you if you agree or disagree.

Rush Limbaugh Doubles Down On Connection Between Homosexuality And ‘Normalizing Pedophilia’ - Meanwhile, he is upon his fourth wife. Okay that sentence made me kinda ill.

Scott Lively Warns 'Wedding Songs to Homosexual Marriage' are Responsible for Noah's Flood and End Times - Apparently this is in the Bible which Lively writes with his own poo.

Mark Ferrandino Becomes Colorado's First Openly Gay Speaker Of The House (VIDEO) - Let's end these news briefs with some good news so you don't think that I have completely lost my mind.
Posted by BlackTsunami at 9:02 AM 2 comments: 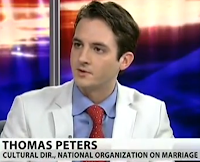 I've always believed the phrase 'religious liberty' was a useless buzzword when used by organizations like the National Organization for Marriage.

The recent non-controversy regarding Washington's National Cathedral proves it.  The Washington Cathedral, one of the largest cathedrals in the country, the "seat of the Episcopal Church," and the host of this month's inaugural prayer service, has decided to host same-sex weddings. It didn't happen by a court order or protest. The Cathedral made the decision on its own.

Wrong if you are a member of the National Organization for Marriage. Thomas Peters, NOM's Cultural Director, said the following:

Examples like this remind us that when you redefine "civil" marriage you create the new possibility of same-sex ceremonies in churches. Gay marriage advocates love to artificially split these two recognitions of marriage when they think it suits their purposes but the categories always re-collapse as soon as a liberal church like this one decides it wants to conduct ceremonies with same-sex partners. The simplest way to prevent same-sex ceremonies in churches is to fight for the recognition of marriage in civil law.


In other words, NOM likes the idea of "religious liberty" when churches use it the way NOM wants them to. When the churches don't . . . then look out!

Posted by BlackTsunami at 5:11 AM 6 comments: