Some of us have yet to get used to this being 2022 but already we are reminded about the need for LGBTQ visibility and especially the benefits of LGBTQ celebrities coming out.

And it's all thanks to an unbelievably insensitive and rather stupid comment by UFC fighter Sean Strickland in December: 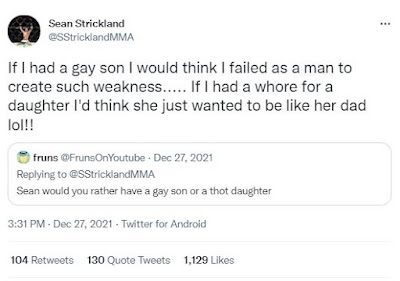 According to the webpage Queerty - and as you can see in the above tweet, Strickland was answering a fan's question. The attention I pay to the homophobia of his comment does not any in way diminish the same degree of eyerolling I commit when it comes to his comment about women. Queerty points out that his comments received a lot of backlash. The site shows that Strickland has a 'knack' for saying stupid and ugly things.

But still, what the hell!!?

With so many LGBTQ kids going through trauma partly because of their justified fears of coming out to their parents, Strickland is setting an awful example. And spare me the oncoming digs about him being a UFC fighter and the hackneyed lines about him supposedly a being 'punch-drunk meathead.' Strickland's type of ignorance goes beyond UFC. It is worldwide and it is ugly.  Just like when Dave Chappelle came out with his transphobic ugliness and folks were quick to diminish the anger of those he attacked, some will also be quick to claim that  backlash to Strickland's comments is 'cancel culture.'

And it is a depressingly simple reason why I support LGBTQ celebrities publicly coming out. Some folks see it as a tiresome trend, repeatedly done to death. Perhaps they have a point. But a much better and much more crucial point is maybe newly coming out celebrities  are standing in the gap for kids whose parents should know better and should be better, but steadily refuses to act better.

Posted by BlackTsunami at 4:08 PM No comments:

Lil Nas X Calls Out the Music Industry's Treatment of Queer Artists​ - Be careful Lil Nas, but speak that truth loud.
Netflix launches 'The Gay Agenda,' podcast celebrating LGBTQ community - Oh really? Well that's nice. But you gonna have to do some more to make up for the Dave Chappelle thing.
15 Celebs Who Came Out As Trans or Nonbinary in 2021 - Yes this is a big deal. A big ole wonderful, glorious big deal (I'm aware that I said 'big' twice)
‘I’d been set up’: the LGBTQ Kenyans ‘catfished’ for money via dating apps - Good Lord . . .
Posted by BlackTsunami at 9:07 AM No comments: