It is ironic to me how some in the religious right falsely accuse the LGBTQ community or the Muslim community of attempting a take over of America when some of them embrace a theology which actually seeks to seize control over the country.

Perhaps you have heard of it. It's called dominionism and while it's been around for quite a while, according to David Brockman of the Texas Observer, it's gaining influence in political circles:

Dominionism fundamentally opposes America’s venerable tradition of church-state separation — in fact, dominionists deny the Founders ever intended that separation in the first place. According to Frederick Clarkson, senior fellow for religious liberty at the non-profit social justice think tank Political Research Associates, dominionists believe that Christians “have a biblical mandate to control all earthly institutions — including government — until the second coming of Jesus.” And that should worry all Texans — Christians and non-Christians alike.

Dominionism comes in “soft” and “hard” varieties. “Hard” dominionism (sometimes called Christian Reconstructionism), as Clarkson describes it, explicitly seeks to replace secular government, and the U.S. Constitution, with a system based on Old Testament law. The father of hard dominionism, the late Presbyterian theologian R.J. Rushdoony, called for his followers to “take back government … and put it in the hands of Christians.”


It sounds like a conspiracy theory and I wish it were. But it's real, particularly in Texas:

Perhaps the most powerful dominionist in Texas politics is Lieutenant Governor Dan Patrick. In a 2012 sermon and again at the 2015 Texas Tribune Festival, he said that the United States was founded on the Bible. Patrick has also made it clear he believes the Bible should determine public policy. In 2014, Patrick said that elected officials must look to Scripture when they make policy, “because every problem we have in America has a solution in the Bible.” (Where the Bible addresses problems like greenhouse gas emissions or cybersecurity, I’m at a loss to explain, even with 20 years of biblical study behind me.) His call for a “biblically-based” policy mindset “doesn’t mean we want a theocracy,” he insisted. “But it does mean we can’t walk away from what we believe.” For Patrick, not “walking away” seems to mean basing policy on his own religious beliefs — as he showed when he opposed same-sex marriage on biblical grounds. (Patrick also did not respond to my request for comment.)

Another dominionist active in Texas politics is conservative firebrand-slash-medical-doctor Steven Hotze. Hotze is linked to Gary DeMar, a dominionist writer and lecturer. DeMar has called for the United States to be governed by Old Testament law, including instituting the death penalty for gay/lesbian sex. As recently as 2013, Hotze was an officer of DeMar’s dominionist think tank American Vision; its mission is “to Restore America to its Biblical Foundation.”


For those who don't remember, Hotze is the leader of  anti-LGBTQ hate group American Vision. In 2015, he testified at a state hearing on marriage equality.  In his testimony, Hotze compared LGBTQs to pedophiles, murderers, and alcoholics. 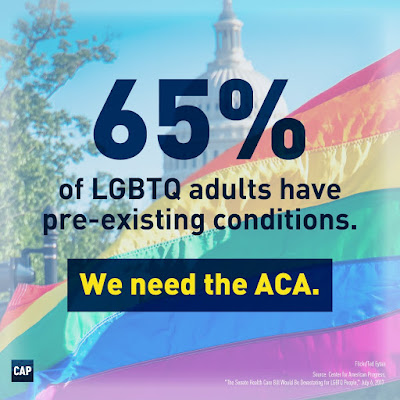 The Senate Health Care Bill Would Be Devastating for LGBTQ People - From The Center for American Progress comes yet another very GOOD reason to oppose Trumpcare. The loss of coverage coming from this awful bill and the scaling back of Medicaid is bad enough for the general population at large. But it would be like a tsunami of destruction for LGBTQ health.

All the Ways Donald Trump Broke His Promises to LGBTQ People - As longtime readers of this blog already know, I am a sucker for good documentation and this article is a wonderful way we can remind certain people about ALL of the ways Trump did dirty to the LGBTQ community. General anger at an elected official is a good thing, but PRECISE anger is deadly.

Washington anti-transgender campaign fails for second year in a row - Don't lose your focus. You know these folks will try again.

It’s Now Undeniable That LGBTQ Rights Are In Danger Of Being Rolled Back - One group which continues to support Trump in large numbers is the religious right because of madness like this. Get ready. It sounds like we are merely in the prelude stage.

Just 11 Rainbow Photos That Will Make You Feel Good About The World - Simply because why not?

Recently, the state of Texas has been a hotbed of homophobia and transphobia as legislators there have been carrying on a war against the LGBTQ community from issues such as marriage equality to transgender rights. In the midst of all of the nonsense are ordinary taxpayers who have stood up against the madness, like this man in the video.

Ken Ballard of Little Elm, Texas, spoke before the Texas legislature earlier this year about his transgender son. Equality Texas re-posted the video this week, and it has become an internet hit. Ken talks about how his son Ash attempted suicide twice while in the process of accepting that he was transgender, which was when Ken found out that his son was only playing the role of being his daughter and couldn’t keep it up. “Am I going to be his bully?” Ken asked himself. He instead became his son’s advocate. The Texas legislature has been trying to pass a bathroom bill this past year. The Republican speaker of the Texas house recently said that he opposed the bill because he didn’t want “a suicide on my hands.”

Posted by BlackTsunami at 4:42 AM No comments: