From my online buddies Jeremy Hooper and Louis Marinelli ,  comes proof that some folks are getting out of hand in voicing their support for Amendment One in North Carolina - the bill which would not only outlaw marriage equality (which is already outlawed in the state as it is) but would cause chaos with unmarried couples and domestic violence laws.

He states on his video page that he is "voting for the Bible."

But the way he chooses to do so has nothing to do with the Bible or the ballot box, but demonstrating that he chooses not to control his water

This is not a joke. I asked him on his video page - "Regardless of how you feel, was it really necessary to do﻿ this thing. Make your choice at the ballot box."

As disgusting as what this young man does, I don't blame him more than I blame the National Organization for Marriage.

History has shown us that instigators generally come into communities and exploit people's fears, beliefs, and prejudices until chaos arises.

Take a good look, Maggie Gallagher, Brian Brown, and the rest of the folks at NOM. This is what YOU  helped cause.

Editor's note - Again, the only way we can speak out against this madness is to make it known, regardless of how angry we may get.

Peter Sprigg, the National Organization for Marriage (and no doubt many others in the religious right) are touting the following video of a religious right organization supposedly being attacked by those who favor marriage equality:

If you don't want to seen the entire video (called Attacked by Tolerance), I don't blame you.  It merely shows snippets of incidents We don't really see many of these incidents in their entirety. This is what its summary says:

In this video, volunteers with the American Society for the Defense of Tradition, Family and Property (TFP) describe how they were violently assaulted by pro-homosexual "marriage" advocates while supporting traditional marriage on college campuses and in the public square.

No doubt, TFP hopes to make the video go viral and it probably will. But let's put some truth in. No doubt, Sprigg, NOM, and other who push this video will omit the following facts:

What exactly is the American Society for the Defense of Tradition, Family, and Property (TFP)? David Badash of The New Civil Rights Movement, a pro-gay blog, did some research and found the following:


TFP Student Action is a project of the American Society for the Defense of Tradition, Family and Property. Founded in 1973, the American TFP was formed to resist, in the realm of ideas, the liberal, socialist and communist trends of the times and proudly affirm the positive values of tradition, family and private property. The American TFP was inspired by the work of the Brazilian intellectual and man of action Prof. Plinio Corrêa de Oliveira.
What We Do
Networking with thousands of students and concerned parents, TFP Student Action defends traditional moral values on college campuses. Inspired by the teachings of the Holy Catholic Church, TFP volunteers are on the front lines of the culture war, working to restore the values of Christian civilization.
TFP activities are carried out by 75 full-time volunteers and have the support of 120,000 members nationwide. The director of TFP Student Action is John Ritchie.
Now, here’s what else you need to know about TFP.

According to the UN Refugee Agency, “[i]n a 1986 article, The Washington Post described TFP as an “all-male, extreme right-wing group with chapters in 13 countries” (15 May 1986). The Brazil-based organization was financed mainly by wealthy South American families and supported the Pinochet dictatorship in Chile (ibid.). It was banned for its paramilitary activities in Venezuela, where it was implicated in 1984 in a plot to assassinate the Pope, a charge that the group denied.”

Now the following is what I have discovered - TFP has a history of creating contrived incidents of supposed violence by gay equality supporters and videotaping these alleged incidents for use by religious right groups.

Pastor: Telling parents to punch kids was joke - Is he serious? I hate to see when he is really trying to be funny.

Wife of NC State Senator says Amendment One is necessary ‘to protect the Caucasian race’ - Gasp and swoon! Has anyone told Patrick Wooden yet?

How a Bullied Gay Marion Teen Used Secret Identity to Fight Back
- This young man should be commended.

David Barton says AIDS is God's Punishment for being Gay. Julia Sugarbaker Disagrees - I mean to post this excellent piece a while back. It says it all about phony Christians casting stones.

Matt Barber: 'The LGBT Agenda and Constitutional Rights Cannot Exist in Harmony' - I can't decide whether Matt Barber gives me bad gas or he looks like he is in a constant state of having bad gas. The latter statement would explain all of his outrageously mean-spirited statements about gays.

Posted by BlackTsunami at 9:13 AM 3 comments:

During a recent Leadership Triangle forum regarding Amendment One (which would wreak havoc in North Carolina for unmarried couples and domestic violence laws if passed) blogger Pam Spaulding of Pam's House Blend had a very interesting conversation with one of the leading supporters of this amendment,  Pastor Patrick Wooden.


. . I know of a case where in a hospital a homosexual male had a cellphone lodged in his anus and as they were operating on him the phone went off, the phone started ringing!

After the forum, Pam questioned Wooden directly on his spurious claims regarding gays and sex, particularly the cell phone claim. The following is what she said took place:

Wooden’s defense is that he was asked to go on the program and he told “an anecdote." I reminded him that he had no data or evidence to support this claim, and that this is only supporting the notion that he thinks being gay is all about sex, and that heterosexuals engage in all sorts of sexual behaviors that don’t have any impact on their civil rights. All he could say was that he has to talk about it in these terms because, by definition, “homosexuals as a group are defined by who they sleep with” and by extension, since his religious view is that homosexuality is a sin, this is what drives him to speak out.

So basically Wooden did not supply any evidence of his claim because there was none. Wooden admitted that the only reason he made the claim  was to create an image of the gay community which is conducive to his religious beliefs that gays are immoral sinners.

In other words, Wooden lied. Deliberately and unashamedly.

Where in the Bible does it say that Christians should lie in accordance to their beliefs?

Seems to me that if a truly Christian man feels that the position he takes on an issue is correct, he should not have to stoop to lies in order to defend it.

Wooden's admittance calls into question not only his integrity, but also his character.

Gays and lesbians partaking in the sacred institution of marriage in no way damages it. We merely want protection for our loved ones and the right to love without fear.

What's so immoral about that?

However, if anyone fears a danger of marriage being corrupted, they would be best served to look in Pastor Wooden's direction and remember his shameless ability to deceive without a shred of impunity.

Marriage is about love, support, and truthfulness. Pastor Wooden is nothing but lies.

To call on him to "protect marriage" is like asking a thief to guard Fort Knox.

The grand irony is that Wooden, according to Pam, said that the pastors who were against Amendment One didn't know how to read their Bibles. Wooden also had some ugly words to say about Rev. Dr. William J. Barber II of the NC NAACP who has been a vocal opponent of Amendment One:

He (Wooden) spoke dismissively onstage about other religious leaders who oppose Amendment One, and when I asked him about the NC NAACP’s Rev. Barber’s Open Letter to North Carolinians and very forceful advocacy against A1, he said that Rev. Dr. Barber is a demagogue (that’s a quote), and is not telling the truth about the harms of the amendment.

So Wooden seems to think that Rev. Barber is a demagogue huh? Well let's just put that one to a visual test: 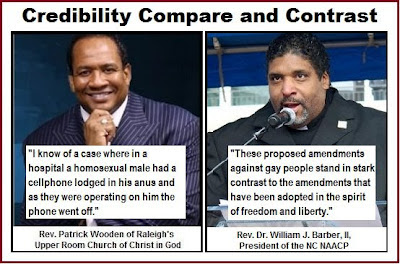 I'm sure the Rev. Barber and the other pastors who oppose Amendment One know the Bible just as well as Wooden.