Shocker! A child meets his first gay couple . . . and nothing happens!

The talk of the National Organization for Marriage, the Family Research Council, and the rest of that bunch about how the subject of marriage equality will " either confuse children or turn them gay" is a bunch of nonsense which is geared to exploiting people's fears.

I could say this all day until I am red in the face, but I think I will let the following video speak for itself. In it, a young boy meets a gay couple for the first time. Just watch what happens:

There are times when children are more intelligent than adults.

Posted by BlackTsunami at 2:46 PM 6 comments:

Opponents Of CA LGBT History Bill: Learning About Gay People Will Turn Kindergarteners Gay - That did it for me. When I learned that Alexander the Great was gay, I began doing my Diana Ross impersonations.

The Company That Rick Perry Keeps: Peter Wagner On Sex With Demons - I'm speechless. Really I am.

Focus staffer tweets about 'noise and nonsense; so here, have some calm clarity - Focus on the Family staffer defends her organization. Good luck on that.

Nobody Pays Attention To Preambles Anyway - About that thing about slavery, Michele Bachmann . . .

New York DA: Clerks Who Refuse To Issue Marriage Licenses To Gay Couples Will Be ‘Subject To Criminal Prosecution’ - I'm all for it. Either do your job or quit. You are representing the state, not yourself. And the state says yea marriage equality.

Here is an interesting item coming from the National Organization for Marriage's blog:

Some creative minds came up with a poster comparing NOM to the KKK. It's outrageous of course. We wouldn't normally bother to notice such stuff, which is par for the course, but even on the gay blogs circulating it a lot of fair minded people are questioning that kind of over the top rhetoric.

So we point out once again, for the fair minded on either side of this debate: When a man came to a NOM rally with a hateful sign, he was immediately told he wasn't welcome. This is why the photo of the hateful sign is not of a sign being held up at a NOM rally but a sign discarded across the street.

Just to make it crystal clear, we then issued a statement denouncing violence, harassment or threats of violence against any one on any side of the marriage debate, including against gay people and gay marriage supporters.

But we do it because it's the right thing to do not because anyone demands this of us.

There are good people on both sides of this debate, and we need to have a country where even intense moral disagreements can be aired without violence or threats or incivility.

Forgive me for not being impressed.

Better yet, forgive me for saying that NOM is basically full of it.

We are talking about an organization whose very existence is dependent on making people believe that the gay community (and I speak on a colloquial sense) is a hedonistic army out to supposedly redefine marriage to the detriment of heterosexual relationships.

We are talking about an organization which sends out fliers claiming that gays want to "teach children how to be homosexual," such as the one below: 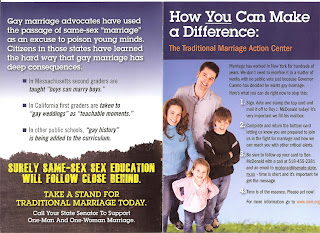 Or commercials claiming the same thing:

And I haven't even touched the organization's phony claims of religious persecution.

NOM certainly isn't advocating violence, but with the spreading of these lies, the organization is creating a very hostile atmosphere by exploiting people's fears that their livelihood will be taken away from them, their children will be harmed, and they will be persecuted for their religious beliefs.

Seems to me that if NOM doesn't want people to be violent, the organization should stop giving them a reason to gather up the pitchforks and torches.