The right is simply chomping at the bit when thinking about what mayhem they can cause should Trump nominee Brettt Kavanaugh get appointed to SCOTUS.

And yes that includes the damage he could possibly do to LGBTQ equality. A group of progressive and LGBTQ groups have united to stand against Kavanaugh. And the Democrats have raised the alarm that much information regarding Kavanaugh is being kept from them.

Sensing panic, many right-wing and evangelical groups are whining that the Democrats are being needless obstructionists against Kavanaugh. One group in general is the *anti-LGBTQ Heritage Foundation. The organization sent out the following tweet: 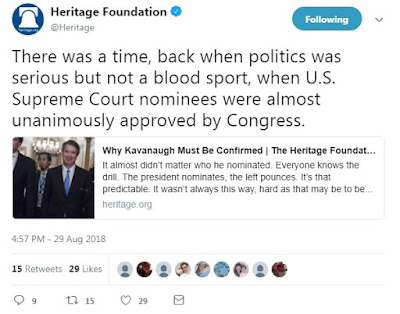 With all due respect, the Heritage Foundation is full of shit. The organization seems to forget its behavior when Senate Republicans blocked Merrick Garland, Obama's pick for SCOTUS and other judges Obama wanted to appoint. Allow me to throw out some reminders via commentaries published on the Heritage Foundation's webpage:

Why Republicans Should Not Fold On Garland's Nomination

In other words, after being the "Amen Corner" for GOP obstruction of Obama's Supreme Court pick and justices in general, the Heritage Foundation thinks it can pull the wool over everyone's eyes with the fake call for civility.

Who does that organization think it's kidding?

The Heritage Foundation could care less about wanting a fair process or fair judges. The organization simply wants judges it knows will rule in its favor even before cases come to court. The Heritage Foundation and the conservative right - especially the anti-LGBTQ right - have no justifiable arguments so they work on "gaming the referees." And unfortunately, they have been very successful thus far.


* The Heritage Foundation also employs anti-LGBTQ spokesperson and all-around charlatan Ryan T. Anderson. It also once employ Roger Severino, Trump's present Director of Office of Civil Rights (at Dept. of HHS). While with the Heritage Foundation, Severino had a long history of opposing LGBTQ equality, even defending the discredited "ex-gay" therapy.
Posted by BlackTsunami at 5:07 PM No comments:


Secret recording catches Trump instructing pastors to campaign for Republicans from the pulpit - And of course the anti-LGBTQ sect will. Folks, there ain't no use in crying about "why isn't this is illegal" because it doesn't matter. Nothing will be done by the law. WE are the ones who must take this mess on and defeat it by voting, getting people to vote, and speaking out on how Trump and conservative evangelicals are weaponizing religion as a tool for grubby materialistic power. Seriously. It's not up to the law to stop this. It's up to us.

MSNBC’s Morning Joe scalds evangelicals for selling out to Trump: ‘They certainly were self-righteous’ about Bill Clinton - And other than our vote, our biggest strength is our mouths. Don't take it for granted that people see right-wing evangelicals as hypocrites. HAMMER THAT POINT repeatedly.

Kathy Griffin burned Milo Yiannopoulos so bad it could’ve scorched his eyebrows - Frivolous, yes. But this is too good. And it's a lesson. Don't let someone make you out for less than you are worth. Always 'handle yo' bizness."

16 More Iconic Same-Sex Couples Through History - This bullshyte notion that the LGBTQ community knows nothing about love and loyalty is gonna stop, if we have to grab it by the neck, sling it down, and stomp all over it. A reminder for us all, particularly our kids, that it is all about love and that love is never diminished by ignorance.

California Passes New Bill to Support LGBTQ Seniors - Thank you California!
Posted by BlackTsunami at 9:17 AM No comments: