When a black gay man is brutally murdered . . .

Marco McMillian was poised to make history as the first openly gay man to run for public office in Mississippi. Instead, supporters are coping with his shocking death.


McMillian was brutally murdered and it has been confirmed that it was because of his sexual orientation. Naturally his murderer is claiming the "gay panic defense," but is also taking it much further. He is claiming that McMillian tried to rape him. Where have we heard this before (I will give you a hint - David Kato, Billy Joe Gaither, Matthew Shepard) in which someone who viciously murders a gay man claims that he panicked because the gay man was "hitting on him." My God, this is going to get ugly.

I just can't talk about it further.

Two good friends of mine, Viktor Kerney and Rod McCullom, have covered this story for Ebony magazine and their blogs. Check out their work and enter the world of what black gay men have to deal with in American society:

MURDER IN THE MISSISSIPPI DELTA - An excellent overview of the entire ugly thing and how it reverberates throughout the entire community.

No Mention of Marco McMillian's life as a Gay Man at Funeral - Truly sad.

Does the Black Community Care When Its Gay Members are Killed? - No comment.

REPORT: Suspect Claims Marco McMillian Tried to "Rape" Him - That's what the murderer's family is saying. It sounds fishy. Sorry but it does.
Posted by BlackTsunami at 3:59 PM 2 comments:

Controversy over new allegations about the Regnerus anti-gay parenting study and how much its funders had to do with its results continue to grow. Check out the following just revealed this morning:

Mark Regenerus and Witherspoon collaboration - For those interested, here is a document dump of information regarding the Regenrus study and how it contradicts with the original story Regnerus told about the involvement of his funders. Page 11 shows something very interesting. On Aug. 22 of 2011 (Editor's note - this post originally had the inaccurate date of Aug. 22 2012), Mark Regnerus and a few other researchers met to discuss a public relations/media plan for the study. One of the researchers was Glenn T. Stanton from Focus on the Family. Stanton is not necessarily a pro-gay advocate. To the contrary, he is on record saying many untrue things about the gay community, including calling marriage equality a "lie of Satan." Harvey: Church Must Fight Against Homosexuality Like Slavery - Linda Harvey is ALWAYS good for a laugh.

New York Times Puff Piece About Focus On The Family Ignores Its Regular Anti-LGBT Rhetoric - More news which should raise eyebrows as to why Regnerus was collaborating with FOF's Stanton to promote his study.
Posted by BlackTsunami at 9:11 AM No comments:

LGBT community needs to get angry over Regnerus study manipulations 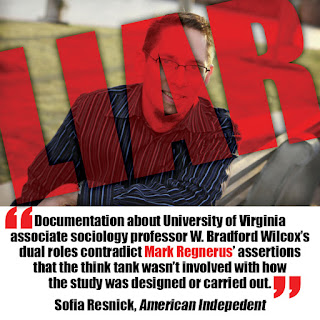 Since the news broke last night about how the funders of the Regnerus anti-gay parenting study had more influence on its findings than originally claimed, the reaction from lgbt community has been interesting.

While some have been justifiably angry, there is that annoying set of folks who have acted either jaded or blase about these new discoveries.

Several have made comments like "The right-wing manipulates another study? Nothing to see here folks" or "So, just how does that prove the study is flawed."

First to answer that last question, the fact that the study is flawed was determined a long time ago. And it was accentuated by the recent brief to the Supreme Court by the American Sociological Association.

This new information proves just why the study was flawed and it brings up further questions. Why wasn't Regenrus truthful about how much influence the study's right-wing funders had on its results?  Why did they expected the study to be a negative against the lgbt community before it was even put to paper?

And while some have made a good point by pointing out that in the long run, this study's claim (regarding same-sex households being inferior than heterosexual households when it comes to the raising of children) may not matter in the DOMA and Prop 8 cases before the Supreme Court, the reality is that the shady facts behind the study yet again points out how the religious right manipulates and cherry-picks science for its own purposes.

And that's an issue which needs more attention instead of folks yawning and turning their backs.

I've said before that an asset to the religious right is the jaded "we have seen it all so you really have to reach to get our attention" attitude of some members of the lgbt community. What's sad is that some of these same individuals  get angry when they see FRC's  Tony Perkins or some other religious right spokesperson touted as "experts" on news programs or when they see flawed work such as the Regnerus study being pushed as legitimate.

My friends, if you demonstrate that you really don't care about phony religious experts and the flawed work they tout (such as the Regnerus study) then why expect anyone else to care?

So my advice? Pull your heads out of your asses, stop acting like a snobby patron in a high-price restaurant, and pay attention to the big picture and the long game for a change.