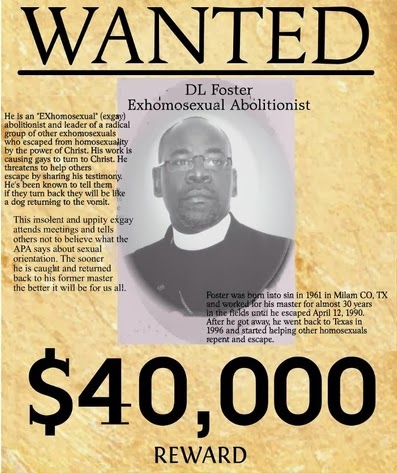 My anger was at LaBarbera for doing what he usually does - attacking the lgbt community via lies and distortions - and Hampton for using his unfortunate personal experiences to demonize all gay men, many of whom are excellent fathers to their children and would not even think of harming a child.

Today, I discovered that Hampton's claim and LaBarbera has a defender.  Supposed ex-gay D.L. Foster took it upon himself to not only make a poor attempt to correct me but also imply that I want some harm to come to LaBarbera

Grab your mask, your hazmat clothing, and your wading boats because the crap this child throws is deep.

For the benefit of you who do not know, Foster is yet another "true believer" in the lie that there is supposedly a "homosexual agenda" afoot. That being the case, he thinks that anything coming out of his mouth scourging the lgbt community is somehow positive. He likes to invoke Satan a lot when talking about lgbts and has expressed the desire for America to criminalize homosexuality.

Foster has also compared himself to Harriet Tubman  (yes the poster you see comes from him) and has compared lgbt activists to slave owners and the Klan.

Michael Sam, the former Mizzou Tigers football player and top NFL draft pick who recently came out as gay, returned last week to his college campus with his teammates to accept the 2014 Cotton Bowl Championship Trophy at halftime of the Mizzou vs Tennessee basketball game.

It was an awesome moment as the crowd gave him a standing ovation.  Slowly but surely, we are entering a brave new world.

Posted by BlackTsunami at 6:06 AM No comments: