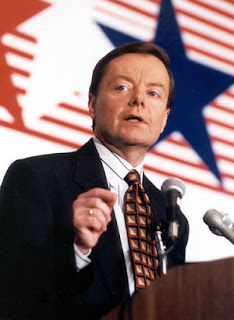 How does the anti-LGBTQ religious right stand on Trump's attempt to cheat his way to second term in spite of the fact that he clearly lost the election to Joe Biden?

Do I even have to ask?

On Thursday, Trump's legal team, led by former NYC mayor Rudy Giuliani, held a press conference about the matter. It was panned as bizarre and surreal but totally devoid of any proof that Trump had been cheated out of a second term.

According to one Mediate article:

Not even Vincent LaGuardia Gambini could successfully litigate the groundless voter fraud cases being brought to various state courts by President Donald Trump’s campaign. But that isn’t stopping Rudy Giuliani from trying — by summoning the spirit of the titular lawyer from the ’90s comedy classic My Cousin Vinny, no less. In an utterly bizarre sequence during a Thursday news conference in Washington, the former New York mayor channeled his Big Apple compatriot, actor Joe Pesci, in an effort to claim that Trump campaign representatives were stationed too far away to meaningly observe the ballots being tallied. (The Pennsylvania Supreme Court rejected this claim on Tuesday.)

And Giuliani wasn't the only one called out for oddball behavior:

Rudy Giuliani got things off to a wild start at the press conference held by President Donald Trump’s legal team, but Sidney Powell was next up to speak, and she cranked things up a notch…or several. Powell, known for representing Michael Flynn before Trump, spoke days after after claiming that the CIA is involved in the Dominion voter fraud conspiracy theory, which has been embraced by Trumpworld since the 2020 election ended. She began by claiming that the “massive influence of communist money through Venezuela, Cuba, and likely China” is the reason why Joe Biden won.

And besides Twitter, several members of the media were highly critical. CNN's Jake Tapper called it a "hot mess" while Fox News's Kirsten Fisher played fact-checker supreme by pointing out the many lies Giuliani and company told
However at One News Now, a "news source" run by anti-LGBTQ hate group the American Family Association, the reaction to the press conference was, shall we say, a bit more positive to Trump's point of view. Not only that, but the article included comments from various religious right figures which left me wondering just what press conference had they viewed:

"I just found myself hoping and praying that enough Americans were hearing [this new conference] because through the filter of the news, many of them will never know any of that. And I think no matter what side you're on, you're going to be concerned if you hear the evidence that Rudy Giuliani and Sidney Powell laid out about the corruption in this election." - Sandy Rios, American Family Association
"We haven't seen the evidence yet – we today heard it described and it's very troubling … and I certainly believe that Donald Trump and Mike Pence won the presidential election. But courts are going to be very reticent to take the risk of throwing out legitimate votes because other votes were illegal or produced from fraud." - Gary Bauer, Campaign for Working Families
"The Trump campaign conference this morning gave me hope: hope that there are still some truly great Americans who love this country enough to go to the mat to save it." Janet Mefferd, Christian radio talk-show host

And it gets more interesting.
Read more »
Posted by BlackTsunami at 4:50 PM No comments:

Lesbian political powerhouse Karine Jean-Pierre is the “top candidate” to be Biden’s press secretary - Oh that would be sweet! Representation matters.
Two terrifyingly anti-LGBT+ candidates running for Virginia governor want to make queer people ‘second class’ citizens - This is bad. Really bad.
New York to Offer ‘X’ Gender Marker on Driver's Licenses - Good for New York!
LGBTQ advocates call 1st Islamic school for transgender students in Bangladesh a "positive step," but not enough - The struggle is universal, y'all.
Posted by BlackTsunami at 8:53 AM No comments: