If the National Organization for Marriage and Vote for Marriage NC - the organization it helped to create to push for an anti-marriage equality referendum in the state - truly want to have a meaningful  and dignified discussion on the amendment as they have claimed, then someone from either group needs to muzzle Raleigh pastor Patrick Wooden.

Wooden will be doing outreach in the African-American community for the amendment.

Last week, he claimed that gay men have so much sex that they require surgery and diapers.

Wooden: I do not back off or back down from my statements at all. I was giving anecdotal examples that I am personally aware of that have happened as a result of men who have given themselves over to this lifestyle. One man past away, a friend of mine shared this information with me, that where what used to be his anus had become a gaping hole and he literally died in diapers, he literally lost control of himself. There are examples of men who have stretched their anuses, their sphincter muscles so that they could fit objects into themselves that once the sphincter muscle is stretched too much it will not contract. Because the truth is, despite the anger of the homosexual community, the anus is not a vagina. A vagina, a woman can give birth, God so designed it, the hips release can give birth to babies and things return back to normal. The anus doesn’t work that way; this is one of the reasons why many male homosexuals place larger and larger objects in their rectums.

. . . I know of a case where in a hospital a homosexual male had a cellphone lodged in his anus and as they were operating on him the phone went off, the phone started ringing! There’ve been instances where men have put bats, baseball bats, in their rectums!

One has to wonder three things. First, was Wooden on any medication which he may have abused before that interview? Secondly how the heck does one put a cell phone up one's behind and thirdly, does it ring if lodged up there?

Wooden is obviously lying and not just about the cell phone. The "gays have dangerous sex" lie is as old as the hills. Take a gander at this 1985 comic (endorsed by anti-gay group Concerned Women for America) called Deathstyle: 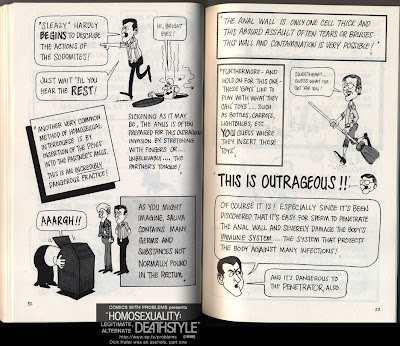 It's almost comical until you realize that Wooden will most likely be repeating that mess to get African-Americans to vote for the amendment.

And of course neither NOM nor  Vote for Marriage NC will comment on Wooden's words, even though they will be in full use of his services. And their silence will emphasize the fact yet again that those who seek to stop marriage equality are willing to do it by any mean necessary even while they whine about being "unfairly" labeled as bigots.

Of course the grand irony of the entire thing is that Wooden was one of the pastors who took part LaBarbera's  recent silly protest against Southern Poverty Law Center. SPLC claims that certain anti-gay groups - including LaBarbera's -  are actually hate groups because they spread hurtful propaganda about the gay community.

I would say conducting an interview with a pastor who claims that gay men wear diapers because they molest brooms, gerbils, and cell phones makes LaBarbera into a first class hypocrite.

Editor's note - On his webpage, LaBarbera prefaces the interview with the following:

Of course LaBarbera never lets anyone know that the study in question was a convenience sample study which looked at gay AND heterosexual men. He also doesn't give the entire story of the phony Fistgate controversy. For that, read 'Fistgate' and President Obama - religious right pushes a pitiful attempt of guilt by association

Posted by BlackTsunami at 3:26 PM 5 comments:

Tammy Baldwin’s Anti-Gay Opponent Attacks Her Pro-LGBT Record - Of course cause we don't want no lesbians in Senate. Why they may think that they are Americans too.

#LGBTFacts - Long story short - some fool started posting some homophobic crap on twitter with this hashtag. But WE have taken it over. Come and join the fun.

Gingrich Tells CBN He Will Fight the 'War Against Religion' - ESPECIALLY that religion which says you can't cheat on your wife. Okay he didn't say that, but you know he wanted to.

Posted by BlackTsunami at 9:03 AM 2 comments:

Hate groups make fools out of themselves at press conference

And it was just as everyone suspected - it was a colossal bomb. But the most interesting portion is the following. Rochelle Conner, a representative of Scott Lively’s Abiding Truth Ministries (an SPLC designated hate group), read a statement from Lively calling for “God himself to destroy” the SPLC:


Transcript - My prayer as one who really does hate irrational prejudice is that the Lord by His sovereign power will remove this dangerous, hate-spreading organization from our nation and its leaders and its members cause them to repent of their wickedness. Finally, to prevent the Southern Poverty Law Center from using my prayer as part of its perpetual fundraising campaign, I want to make clear that I am asking God himself to destroy their organization and I am asking that it be by His miraculous hand and not by human beings just so as with Sodom and Gomorrah, they will know that God will get the glory, and not man.

By the way, you will notice that standing next to LaBarbera - who is the only white male in the small group for those who have never seen him - is "diaper pastor" Patrick Wooden. I heard that they were filming their own press conference, so of course Wooden just had to position himself to be at the forefront of the camera.

My guess - and forgive if I am being sacrilegious here - is that the only reason why God didn't strike these folks down for their lies is because he was laughing so hard.

The press conference was so pitiful that it's not even worth getting angry about. However, I will say one thing.

I love girlfriend's hat. And those boots? Smoking!