Right-Wing Media Freak Out Over Same-Sex Marriages At The Grammys - Another bit of proof that the performance was a smashing success. Just one of the comments: 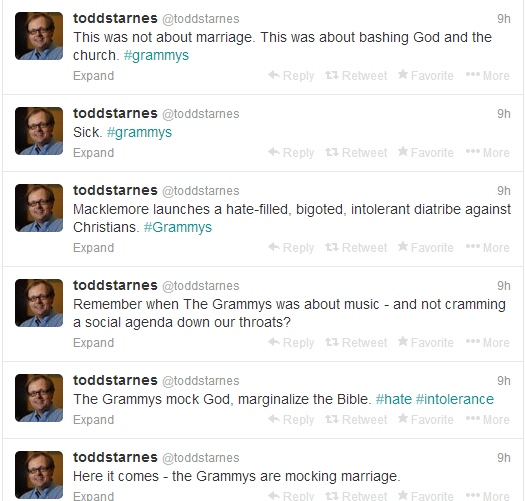 Doesn't Fox News's Todd Starnes remind you of a stereotypically sexually repressed character from a 1970s motion picture who would get caught in an unusually compromising situation at the ending?

Kansas And South Dakota Consider ‘Licenses To Discriminate’ Against Same-Sex Couples - It will ultimately fail in the courts (I hope) but until then, these laws promises to cause the lgbt community a lot of trouble.

Jason Collins to attend State of the Union - Sweeeet! Now can some basketball team please employ this young man.

This week: Two state marriage rallies to feature extreme speakers - And they swear they don't know why they are losing.

Sochi Mayor Says There Are No Gay People In His City - Translation - "boy does my city suck. why is the Lord punishing me by sticking me in this boring place."
Posted by BlackTsunami at 9:00 AM No comments:

Without question, the most memorable moment last night at the Grammys was Macklemore & Lewis's performance of "Same Love" (accompanied by Mary Lambert, Queen Latifah, and Madonna) when 34 gay and heterosexual couples were married. Never mind what the anti-gay right will say. Their outrage is predictable.

But some folks on our side have whined about "publicity stunts" and such. I say "hush up already." Now usually, I'm one for condemning the seemingly mixture of lgbt culture and the fascination with celebrity.

However in this case, I am making a huge exception. For all of the possibly justifiable faults, the one thing which stands out for me about this performance is its potential.  In many places in America and the world, some lgbt child watched that performance and probably realized that in spite of all of the lies, ugly words and hate he/she has to endure from some people, the happy ending of love with that special someone is still possible.

You would be surprised how that one thing, which may seem insignificant in the face of all of the whining about a "publicity stunt," is probably the most powerful and enduring thing of all.

Editor's note - just in case the above video gets pulled from youtube, see it here on Buzzfeed.
Posted by BlackTsunami at 5:03 AM 6 comments: