The online publication The Insider has created an engrossing database which tracks the presence of 259 LGBTQ and gender minority characters in children's animated programs from the 1950s until now.

From early Bugs Bunny to Disney villains like Ursula in “The Little Mermaid,” queer culture and gender transgression have always been present in animation. Historically, that inclusion has been illustrated through subtextual representation, leaving viewers to extract what they will — or won’t — from coded characters and storylines. But in the past decade, small-screen animation has undergone a noticeable shift. Representation in children’s cartoons in particular has increased in frequency, nuance, and overtness.

Establishing a specific criteria, characters and the programs which comprise The Insider's database range from the obvious: 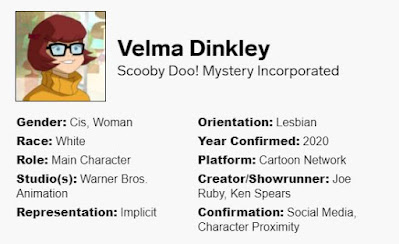 To who the heck is this: 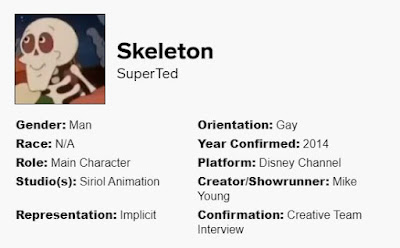 Announcing a list such as this generated a small, but vocal controversy. On Twitter, several people voiced the usual nonsense about children being "indoctrinated," and the equally popular "why are they exposing children to this?" which is always followed by "I don't have a problem with gay people, but why are they pushing this on children." And lastly some form of the inane refrain of "let kids be kids."
But I've discovered the funniest thing about these moral squad crusaders. When you let them expend their energy on their hysterical overtures and then simply ask them what is the wrong with LGBTQ characters in children's animation, you will find that either they can't cite a specific problem or they cling to the silly belief that LGBTQ people simply existing is a risque issue. And God forbid if you bring up the existence of LGBTQ families and their children and how these animated programs are doing nothing more than reflecting a simple and innocent reality.
Strange, isn't it? Almost as if their ignorance and dehumanization of us, our families, and children is intentional. It's almost as if it's not enough for them to have silly and dated ideas of LGBTQ people. They want to force those beliefs on the rest of us even though we know better.
Posted by BlackTsunami at 5:03 PM 2 comments: