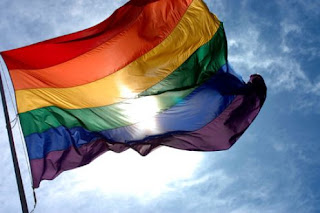 America ‘turns back on’ LGBT refugees who fled ISIS persecution as Trump axes resettlement plan - Just in case you think the lgbt community isn't affected by Trump's anti-immigration madness. Sad irony alert - there were some folks saying that we should vote for Trump if we fear what ISIS would do to lgbts. We are now seeing that was verbal nonsense. If you won't protect my brothers and sisters from other countries, then I really don't expect you to protect me. And yes, major lgbt organizations have raised the alarm over this.

The Queer Response To Trump’s Promise To Build Wall Along Mexican Border - And we don't like his jacked up idea about a wall, either.

The insidious new line in South Dakota’s bill attacking transgender kids - People who are bound to create havoc can use anything for their own purposes, even one seemingly innocent word.

State treasury official resigns after declaring homophobic jokes ‘back on’ under President Trump - Fools are going to slowly but surely learn that Trump being president can't save their ass should they choose to BE asses.

Meet Anti-LGBTQ Extremism’s Insidious New Leader - "Look, Martha. We got another one."
Posted by BlackTsunami at 9:13 AM No comments:

I'm in love with this Kellogg's commercial featuring 'Mark & Chris'

This Kellogg's commercial from the United Kingdom featuring gay couple Mark and Chris is so simple, yet says so much. This is partly what it's all about. Having a normal life with someone you love.

Chris Hall and Mark Hearfield, who hail from Bury, England, are among the eight families featured in Kellogg’s “My Perfect Bowl” effort, which highlights the “weird ways” that people eat the signature cereal. In the clip above, Hall, 42, says he likes his cereal with “piping hot” milk and honey. Hearfield, 59, prefers a more straightforward, “room temperature” preparation. The men, who have been together for 22 years, told The Bury Times that they were thrilled to take part in the commercial, which debuted on YouTube and British network television on Jan. 6.