A while back, the American Family Association claimed that it had a huge project in the works. I have a feeling that the following is the project: 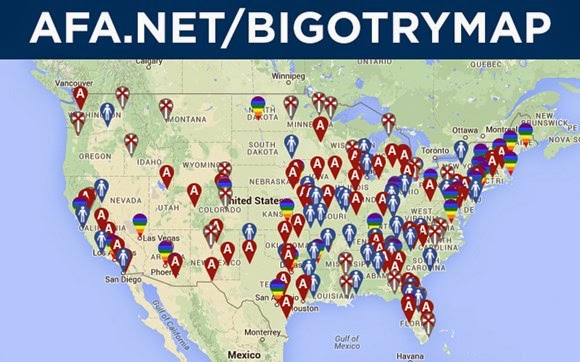 According to the AFA:

The American Family Association has identified over 200 groups and organizations that openly display bigotry toward the Christian faith.

The website www.afa.net/bigotrymap includes an interactive map that identifies groups whose actions are deeply intolerant of the Christian religion. Their actions have endorsed efforts to silence Christians and to remove all public displays of Christian heritage and faith in America.

A common practice of these groups is threatening our nation’s schools, cities and states. By threat of lawsuit, they demand that prayer be removed from schools and city council meetings, Ten Commandments monuments stricken from courthouses and memorial crosses purged from cemeteries and parks.

Because of anti-Christian bigotry, private business owners have been sued and forced to close their businesses. Families and businesses that express a Christian worldview on social issues often face vicious retaliation from anti-Christian zealots.


The AFA is copying, or rather stealing, the idea of the Southern Poverty Law Center's Hate Map.

Read more »
Posted by BlackTsunami at 9:03 AM 2 comments: