While phony christians lie in Washington, lgbt children are getting murdered in Puerto Rico 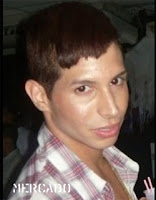 While a bunch of phony christians (with a small "c") went to Washington to grandstand today, we have been alerted to something awful happening to one of our lgbt children:

On November 14 the body of a gay 19 year old was found a few miles away from the town in which he was residing in called Caguas. He was a very well known person in the gay community of Puerto Rico, and very loved. He was found on the site of an isolated road in the city of Cayey, he was partially burned, decapitated, and dismembered, both arms, both legs, and the torso.


This has caused a huge reaction from the gay community here, but its a difficult situation. Never in the history of Puerto Rico has a murder been classified as a hate crime. Even though we have to follow federal mandates and laws, many of the laws in which are passed in the USA such as Obama’s new bill, do not always directly get practiced in Puerto Rico. The police agent that is handling this case said on a public televised statement that "people who lead this type of lifestyle need to be aware that this will happen”

To be fair, all of the details of this situation are not fully known. But the contrast between  what happened today in Washington and the news of this child's murder couldn't be more stark

While those who claim to be working in God's name went to Washington to push a lie (that has been exposed time and time again regarding hate crimes legislation), our lgbt children seem to be in danger on a worldwide level.

Just who do you think God is paying attention to?

Posted by BlackTsunami at 3:24 PM 6 comments: Links to this post

MORMON RESPONSE - Last week, the Mormon Church embraced pro-lgbt rights legislation for the first time ever. Since that time, they have gotten a lot of mess thrown at them but nothing more shocking than this anti-gay leaflet (click on it at your own risk) that was allegedly sent out to 80,000 people. Now you know how WE feel, guys!

Anti-Gay Groups Oppose a Lesbian for Mayor of Houston - It would just kill some people to have an lgbt for mayor.

Will disapproval of homosexuality lead to jail today in Washington, DC? - Today's anti-lgbt hate crimes legislation protest gets called out for the sham that it is.

Posted by BlackTsunami at 9:08 AM No comments: Links to this post

Today at 1:30 p.m., Christian Anti-Defamation Commission and various other groups will stand in front of the Justice Department and protest the recent lgbt-inclusive hate crimes law recently signed by President Obama.

They are hoping to get arrested for preaching about how "evil" homosexuality is, thereby adding credence to their narrative that the law punishes speech rather than action:

Ministers from various denominations will preach from the Bible, especially those parts that speak to the sin of homosexuality. This will serve to reassure ministers and Christians that they are free to do the same.

A letter from Matt Staver of Liberty Council will be presented to Attorney General Eric Holder that expresses our concerns about the many unconstitutional aspects of the hate crime bill. Specific legal challenges also may be announced then.


CADC doesn't have a leg to stand on because it has been proven continuously that hate crimes legislation has nothing to do with speech.

But since they have been proven wrong with logic, the CADC and their supporters are relying on repetition to beat folks down.

In a perfect world, this group and their cohorts would be ignored. Unfortunately, as the creation of cell phones have shown, this is not a perfect world.

Maybe they will be ignored, but I am suspecting something interesting to come out of today's protest and I am hoping that folks in our community don't provide it.

Posted by BlackTsunami at 5:03 AM No comments: Links to this post